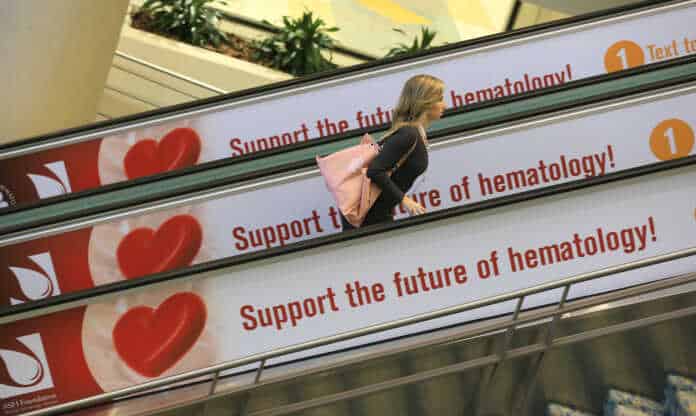 A preclinical abstract describing TRPH-222, also known as CAT-02-106, an anti-CD22 antibody-drug conjugate or ADC being developed by Triphase Accelerator for the treatment of patients with lymphoma, has been been accepted by the American Society of Hematology as a poster presentation at the 59th ASH Annual Meeting & Exposition, taking place from December 9-12, 2017 at the Georgia World Congress Center, Atlanta, Georgia.[1]

The poster presentation coincides with a publication of a manuscript by Drake PM, Carlson A, McFarland JM et. al., discussing CAT-02-106, Catalent Biologics‘ research designation for the TRPH-222 program prior to Triphase acquiring the worldwide rights to further develop the program from Catalent Biologics in 2016.[2]

For an overview of oral and poster presentations about antibody-drug conjugates (ADCs) to be presented during the 59th ASH Annual Meeting & Exposition, taking place from December 9-12, 2017 at the Georgia World Congress Center, Atlanta, Georgia, click Here.

CD22 is a clinically validated ADC target with potential in non-Hodgkin lymphoma (NHL) and acute lymphoblastic leukemia (ALL).

Non-Hodgkin lymphoma is a diverse group of cancers that collectively rank among the top 10 most commonly diagnosed cancers worldwide. While long-term survival trends are generally improving, there still remains a significant unmet clinical need for treatments to help patients with relapsed or refractory disease. One cause of relapsed or refractory disease is drug efflux through upregulation of xenobiotic pumps, such as MDR1.[2]

Pre-clinical data have shown that this optimization of payload placement and linker composition, combined with the stability afforded by HIPS chemistry, leads to better tolerability and expanded therapeutic index.

“We continue to be encouraged by the pre-clinical data from the TRPH-222 program, indicating better tolerability and an expanded therapeutic index for this SMARTag ADC as compared to conventional ADCs,” noted Henry Lowman, Executive Director of Research and Development at Triphase.

“We believe this molecule can play an important role in the treatment of lymphoma and we are committed to accelerating its development into the clinic,” Lowman added.

The aldehyde tag technology employs natural co-translational modifications found in human cells to create one or more attachment sites at designated positions on protein molecules. These chemical “handles’’ are then stably conjugated to payloads (e.g. cytotoxic or effector) to prevent their systemic release.

“[It’s exciting to see] the rapid progress Triphase has achieved with this important compound,” commented Mike Riley, Vice President & General Manager of Catalent Biologics, following the announcement of the poster presentation at the upcoming annual meeting of American Society of Hematology.

ADC Therapeutics and Adagene Enter into a Discovery Collaboration and License...