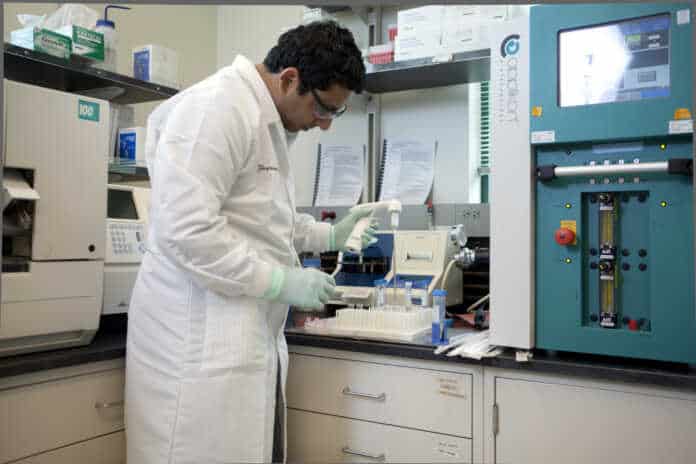 Seattle Genetics, Inc. and Bristol-Myers Squibb Company have entered into a clinical trial collaboration to evaluate the investigational combination of the antibody-drug conjugate or ADC brentuximab vedotin (Adcetris®; Seattle Genetics) and the immunotherapy nivolumab (Opdivo®; Bristol-Myers Squibb) in two planned Phase I/II clinical trials. The first trial will evaluate the combination of brentuximab vedotin and nivolumab as a potential treatment option for patients with relapsed or refractory Hodgkin lymphoma (HL), and the second trial will focus on patients with relapsed or refractory B-cell and T-cell non-Hodgkin lymphomas (NHL), including diffuse large B-cell lymphoma or DLBCL.

Treatment options: old and new
Following World War II, Milton Winternitz at Yale, obtained a contract from the U.S. Office of Scientific Research and Development to study the chemistry of the mustard compounds. He asked two prominent Yale pharmacologists, Alfred Gilman and Louis Goodman, to examine the potential therapeutic effects of these vesicant war gases. Goodman and Gilman developed experiments in mice bearing a transplanted lymphoid tumor with one nitrogen mustard and observed marked regressions. These researchers convinced their colleague Gustaf Lindskog, a thoracic surgeon, to administer nitrogen mustard to a patient with non–Hodgkin’s lymphoma and a marked regression was observed in this and other lymphoma patients. Although the initial study was conducted in 1943 the results were not published until 1946 [1][2], the results set off a flurry of researcher projects involving the the synthesis and testing of several related alkylating compounds, including oral derivatives such as chlorambucil (Leukeran®; GSK), which is used treat a certain type of chronic lymphocytic leukemia (CLL), non-Hodgkin’s lymphoma (NHL) and Hodgkin’s disease, and ultimately cyclophosphamide (Cytoxan®; Bristol-Myers Squibb Company), used to treat a host of cancers, including Hodgkin’s lymphoma and non-Hodgkin’s lymphoma, cutaneous T-cell lymphoma, multiple myeloma, and certain types of leukemia, including chronic lymphocytic leukemia, chronic myelogenous leukemia, acute myeloid leukemia, and acute lymphoblastic leukemia as well as retinoblastoma, neuroblastoma and ovarian cancer.

A number of the treatments for Hodgkin lymphoma, developed in the 1960s and 1970s, were considered very effective. One major breakthrough for Hodgkin’s disease occured with the discovery of the activity of ibenzmethyzin (which was later renamed procarbazine; approved in 1969) by Brunner and Young [3] and DeVita and colleagues. [4] This drug had an established role as a single agent in combination chemotherapy of Hodgkin’s disease. However, as a result of severe adverse events it was recommended that procarbazine was only to be used against malignant disease by clinicians experienced in its use and cognizant of potential adverse effects.[5]

One of the reasons stated was that long-term follow-up care of patients who received these treatments showed risk for side effects later in life, including infertility, cardiovascular problems, including heart failure, leaky heart valves, heart attacks, and secondary cancers, such as lung cancer and breast cancer. These long-term problems were partly caused by the types of chemotherapy used at that time.

While, to some extend, effective, most patients with a specific type and stage of cancer received the same treatment. The result was that some treatments worked well for some patients but not as well for others. Following the development of hybridoma technology, first described by George Köhler and Cesar Milstein in 1975, the prospect of targeted antibody therapy – killing the tumor while sparing the healthy, surrounding, cells, became a reality. [6] A few years later, in 1980, Lee Nadler treated a patient with non-Hodgkin’s lymphoma with a murine monoclonal antibody directed against a lymphoma-associated antigen. This patient was the first in the United States to receive an antibody treatment. [7]

Since the early days, advances in molecular technology have made the synthesis of highly customizable molecules possible. While promising, this development has often proved to be technically difficult, produced disappointing efficacy, and were often not broadly applicable to patients with a specific malignancy.

Interestingly, the treatment of patients with advanced stage or relapsed low-grade non-Hodgkin’s lymphoma is an exception since these patients are not curable using conventional approaches and are usually treated with combination chemotherapy regimens of increasing intensity as needed to reduce disease and palliate symptoms.

Growth in the knowledge of the biology of cancer and the patient’s genetics further helped researchers to understand the genetic differences in people and their tumors – and helped them understand the many different responses to treatment, leading to more targeted therapies, including treatment with both unconjugated monocolonal antibodies – which relies on host immune effector mechanisms such as antibody-dependent cell-mediated cytotoxicity (ADCC) and complement-dependent cytotoxicity or CDC as well as direct anti proliferative effects induced by monocolonal antibodies binding to a tumor cell and antibody-drug conjugates or ADCs.

Brentuximab vedotin is an antibody-drug conjugate directed to CD30, a defining marker of classical Hodgkin lymphoma, which combines the targeting ability of a monoclonal antibody, via a protease-cleavable linker, to the potent, cell-killing microtubule disrupting agent monomethyl auristatin E (MMAE). Using Seattle Genetic’s proprietary technology, the antibody-drug conjugate employs a linker system that is designed to be stable in the bloodstream but to release MMAE upon internalization into CD30-expressing tumor cells.

In the planned clinical trials, brentuximab vedotin is used in combination with the immunotherapy nivolumab, a human programmed death receptor-1 (PD-1) blocking antibody that binds to the PD-1 receptor expressed on activated T-cells.

Improving outcomes
“This collaboration will expand our broad brentuximab vedotin clinical development program towards our goal of improving outcomes for patients with Hodgkin lymphoma and other CD30-expressing malignancies,” noted Clay B. Siegall, PhD., President and Chief Executive Officer of Seattle Genetics. “Ultimately, our vision is to advance the treatment of cancer by exploring more targeted treatment approaches that result in enhanced activity, reduced toxicities and improved long-term results for patients. We look forward to working with Bristol-Myers Squibb to define the activity and tolerability of adding nivolumab to brentuximab vedotin, and informing this potential treatment strategy in hematologic malignancies.”