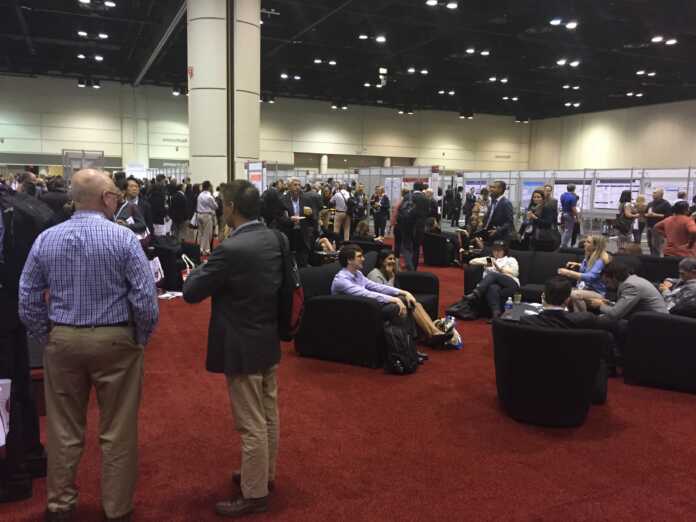 Brentuximab vedotin is an antibody-drug conjugate or ADC directed to CD30, a defining marker of classical Hodgkin lymphoma.  The anti-CD30 monoclonal antibody of brentuximab vedotin is attached by a protease-cleavable linker to monomethyl auristatin E or MMAE, a microtubule disrupting agent, utilizing Seattle Genetics’ proprietary technology. One of the unique aspects of brentuximab vedotin is that it employs a linker system that is designed to be stable in the bloodstream but to release the cytotoxic MMAE upon internalization into CD30-expressing tumor cells.

Approval and ongoing trials
Brentuximab vedotin is approved by the U.S. Food and Drug Administration for the treatment of patients with classical Hodgkin lymphoma after failure of autologous hematopoietic stem cell transplantation (auto-HSCT) or after failure of at least two prior multi-agent chemotherapy regimens in patients who are not auto-HSCT candidates. The drug is also approved for the treatment of classical Hodgkin lymphoma patients at high risk of relapse or progression as post-auto-HSCT consolidation, as well as accelerated approval for the treatment of patients with systemic anaplastic large cell lymphoma (sALCL) after failure of at least one prior multi-agent chemotherapy regimen. The sALCL indication is approved under accelerated approval based on overall response rate.

In addition to the trials being presented in oral and poster presentations this year, the drug is broadly evaluated in more than 70 ongoing clinical trials, including the phase III ALCANZA trial and two additional phase III studies, ECHELON-1 in frontline classical Hodgkin lymphoma and ECHELON-2 in frontline mature T-cell lymphomas, as well as trials in many additional types of CD30-expressing malignancies, including B-cell lymphomas.

Improving therapeutic options
“For the past decade, we have been committed to improving the therapeutic options for Hodgkin lymphoma patients, and we have made tremendous progress with brentuximab vedotin, which is now FDA-approved for two Hodgkin lymphoma indications and is being evaluated broadly in multiple settings and combinations across more than 45 ongoing clinical trials,” noted Jonathan Drachman, M.D., Chief Medical Officer and Executive Vice President, Research and Development at Seattle Genetics.

“The data presented [this year] at the [57th American Society of Hematology (ASH)] annual meeting continues to support our goal to establish brentuximab vedotin as the foundation of care for Hodgkin lymphoma. Notably, final results from the pivotal Hodgkin lymphoma clinical trial demonstrate that some patients remain free from recurrence after more than five years of follow-up. We continue to explore novel brentuximab vedotin combinations in the salvage setting and in older frontline Hodgkin lymphoma patients, with data from ongoing phase 1/2 and phase 2 clinical trials demonstrating objective response rates greater than 90%, supporting further follow-up and evaluation of therapeutic strategies,” Drachman continued.

Single-agent brentuximab vedotin
A pivotal, single-arm trial, which supported the FDA approval in 2011 of brentuximab vedotin for relapsed or refractory Hodgkin lymphoma, was conducted in 102 relapsed or refractory Hodgkin lymphoma patients who had previously received an autologous stem cell transplant (ASCT) assessed the efficacy and safety of single-agent brentuximab vedotin. In addition, the trial was designed to determine duration of response, progression-free survival and overall survival. Enrolled patients had received a median of more than three prior chemotherapy regimens.[1]

Of the 102 patients treated, 15 remained in remission per investigator assessment with a median observation time of 69.5 months (range, 66.5–72.9 months) and may – potentially – be cured. Of these patients, nine received no further therapy and six received consolidative allogeneic stem cell transplant.
Furthermore, of the 34 patients who had a complete remission, the median overall survival and progression-free survival had not yet been reached.

Overall, patients received a median of nine cycles of brentuximab vedotin treatment and patients who achieved a complete remission received a median of 13.5 cycles of therapy. In this trial, the most common adverse events of any grade were peripheral sensory neuropathy, fatigue, nausea, neutropenia and diarrhea. Treatment emergent peripheral neuropathy was experienced by 56 patients (55%). Eighty-eight percent of these patients experienced improvement of their peripheral neuropathy symptoms, including 73% with complete resolution. Furthermore, the most common Grade 3 or higher adverse events occurring in at least 5% of patients were neutropenia (20%); peripheral sensory neuropathy and thrombocytopenia (8% each); and anemia (6%).

A progression-free survival analysis evaluating subgroups, including the number of risk factors, initial response to salvage therapy and disease characteristics, showed patients with more risk factors for relapse post-ASCT appeared to have the greatest benefit from brentuximab vedotin consolidation therapy.

In this trial, patients remain in long-term follow-up. A final overall survival analysis is planned for 2020.

Combination therapy
Interim results were presented from an ongoing phase II clinical trial evaluating brentuximab vedotin in combination with dacarbazine, an antineoplastic indicated for the treatment Hodgkin’s disease as a secondary-line therapy when used in combination with other antineoplastic agents, or bendamustine (Treanda®; Cephalon/Teva Pharmaceutical Industries), indicated for the treatment of patients with indolent B-cell non-Hodgkin lymphoma (NHL) that has progressed during or within six months of treatment with rituximab (Rituxan®; Genentech/Biogen Idec) or a rituximab-containing regimen, as frontline therapy for Hodgkin lymphoma patients age 60 years or older.

Brentuximab vedotin combination data were reported from 22 patients treated with dacarbazine and 20 patients treated with bendamustine. The median age of patients was 69 years in the dacarbazine combination arm and 75 years in the bendamustine combination arm. At least 70% of patients in each arm had stage III/IV disease at the time of diagnosis and the majority were frail with multiple comorbidities. The data will be highlighted in an oral presentation by Christopher Yasenchak, M.D., Willamette Valley Cancer Institute and Research Center/US Oncology Research. [3]

The results of the study evaluating the combination of brentuximab vedotin + dacarbazine or bendamustine showed that of the 21 evaluable patients in the dacarbazine combination arm, all patients (100%) had an objective response (OR), including 14 patients (67%) with a complete remission and seven patients (33%) with a partial remission.

In the  bendamustine combination arm, all 16 evaluable patients (100%) had an objective response (OR), including 13 patients (81%) with a complete remission and three patients (19%) with a partial remission.

The most common adverse events of any grade occurring in at least 25% of patients in the dacarbazine combination arm were peripheral sensory neuropathy (77%); constipation (45%); fatigue and nausea (41 percent each) and joint pain and peripheral edema (32% each).

The most common adverse events of any grade occurring in at least 25% of patients in the bendamustine combination arm were diarrhea (75%); nausea (60%); fatigue (55%) and decreased appetite and fever (40% each). Two patient deaths considered unrelated to treatment occurred within 30 days of last dose of study drug. Enrollment on the bendamustine arm was closed given the tolerability of the combination did not meet study goals for this fragile patient population. Patients in this arm continued to receive treatment with single-agent brentuximab vedotin.

Tolerability of combination
During the 2015 ASH meeting in Orlando, updated data were presented from an ongoing phase I/II single-arm, open-label clinical trial evaluating the efficacy and tolerability of brentuximab vedotin in combination with bendamustine in Hodgkin lymphoma patients who had relapsed or were refractory to frontline therapy. The combination therapy was administered every three weeks, for up to six cycles, followed by additional treatment with single-agent brentuximab vedotin for up to a total of 16 cycles of therapy. After patients have received at least two cycles of combination therapy, they have the option to pause treatment to receive an ASCT and then resume treatment with single-agent brentuximab vedotin as consolidation. Current treatment options in this setting include salvage chemotherapy regimens that historically have resulted in variable complete remission rates of 19 to 60% and are associated with significant toxicities.

Data were reported from 55 patients with a median age of 36 years. The majority of patients (53%) had stage III/IV disease at the time of initial diagnosis, with 28 primary refractory patients (51%) and 27 relapsed patients (49%) after frontline therapy, primarily consisting of the chemotherapy regimen ABVD (Adriamycin, bleomycin, vinblastine, dacarbazine).

The updated trial data from this phase I/II trial showed that of the 53 evaluable patients, 49 patients (93%) had an objective response (OR) to combination therapy with brentuximab vedotin plus bendamustine, including 40 patients (76%) with a best response of complete remission and nine patients (17%) with a best response of partial remission. The complete remission rate was 88% in relapsed patients and 64% in primary refractory patients.

The median overall survival for all 53 patients, including the 40 patients who received an ASCT, had not yet been reached. The estimated 18-month progression-free survival rate was 75% for the 53 evaluable patients and 83% for the 40% who proceeded to ASCT.

For patients who achieved a complete remission during combination therapy, the percentage of progression events was similar whether patients did or did not have an ASCT (21% versus 17%, respectively).

Patients who did not receive brentuximab vedotin consolidation treatment experienced a higher proportion of progression-free survival events compared to those who received consolidation therapy (29% versus 15%).

Infusion-related reactions
The most common adverse events from combination treatment were infusion-related reactions or IRRs which were seen in 58% of patients. The most common symptoms associated with IRRs occurring in more than 15% of patients were fever, chills, dyspnea, flushing and nausea. The trial protocol was amended to require premedication with corticosteroids and antihistamines, which decreased the severity of IRRs.

Avicenna Oncology and Cellectar Biosciences Collaborate on the development of Novel...