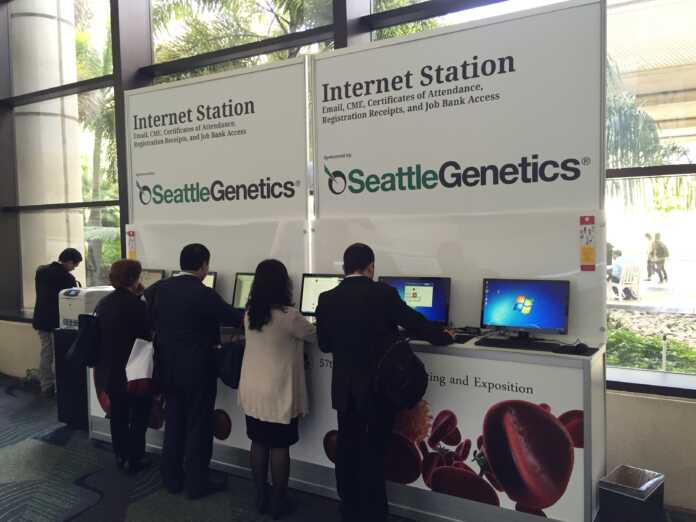 During the 57th ASH annual meeting, preclinical data from another new antibody-drug conjugate or ADC program called SGN-CD19B in B-cell malignancies was also featured in an oral presentation. About 85% of non-Hodgkin lymphomas or NHLs are B-cell lineage.  NHL is categorized into indolent (low-grade) or aggressive, including diffuse large B-cell lymphoma or DLBCL. DLBCL is the most common type of NHL. According to the American Cancer Society, more than 71,000 cases of NHL were to be diagnosed in the United States during 2015 and more than 19,000 people would die from the disease.

Acute lymphoblastic leukemia, also called acute lymphocytic leukemia or ALL, is an aggressive type of cancer of the bone marrow and blood that progresses rapidly without treatment. In ALL, lymphoblasts, which are malignant, immature white blood cells, multiply and crowd out normal cells in the bone marrow. ALL is the most common type of cancer in children and in about 80% to 85% of these children with ALL, the leukemia starts in B cells.

According to the American Cancer Society, more than 6,000 people were diagnosed with ALL during 2015, and more than 1,400 would die from the disease. And while most cases of ALL occur in children, most deaths from the disease (about 4 out of 5) occur in adults. One reason is that, according to the American Cancer Society, children may do better because of differences in childhood and adult ALL in the disease itself, differences in treatment (children can often handle aggressive treatment better than adults), or some combination of these factors.

Antibody-drug conjugates
The two antibody-drug conjugates or ADCs, denintuzumab mafodotin (SGN-CD19A; 19A) and SGN-CD19B, both target CD19, a protein broadly expressed across all subtypes of B-cell malignancies, and utilize two of Seattle Genetics’ proprietary payloads, the synthetic cell-killing agent monomethyl auristatin F (MMAF) and a pyrrolobenzodiazepine (PBD) dimer, respectively.  One of the unique features of these novel agents is that they are designed to be stable in the bloodstream, and to release its cytotoxic agent upon internalization into CD19-expressing tumor cells. This approach is intended to spare non-targeted cells and thus reduce many of the toxic effects of traditional chemotherapy while enhancing the antitumor activity.

Seattle Genetics has initiated the first of two planned phase II trials of denintuzumab mafodotin in DLBCL and plans to advance SGN-CD19B into a phase I trial in 2016.

Further investigation
“Data presented at [57th Annual Meeting of the American Society of Hematology] from our 19A phase I trial in non-Hodgkin lymphoma show encouraging objective response rates, particularly in relapsed DLBCL patients, and a tolerability profile that we believe supports further investigation as part of novel regimens. Based on these data, we recently initiated a phase II trial in relapsed DLBCL, and plan to initiate a phase II trial in frontline DLBCL during 2016,” said Jonathan Drachman, M.D., Chief Medical Officer and Executive Vice President, Research and Development at Seattle Genetics.

“CD19 is an attractive target for NHL, and there is a clear need for potent, safe and convenient therapies that can be used to improve outcomes for patients,” Drachman continued.

With more than 15 years of experience and innovation, Seattle Genetics is leading the development of antibody-drug conjugates, a technology designed to harness the targeting ability of antibodies to deliver cell-killing agents directly to cancer cells. More than 25 ADCs in clinical development utilize Seattle Genetics’ proprietary ADC technology.

Denintuzumab Mafodotin in B-Lineage Non-Hodgkin Lymphoma
During the 57th ASH Annual Meeting data were reported from 62 patients with relapsed or refractory NHL, including 54 patients with DLBCL, five patients with mantle cell lymphoma and three patients with grade 3 follicular lymphoma. Of the 62 patients, 37 patients (60%) were refractory to their last therapy and 25 patients (40%) were relapsed. Sixteen patients (26%) had received a prior autologous stem cell transplant. The median age of patients was 65 years. [1]

The primary endpoints of the ongoing clinical trial are to estimate the maximum tolerated dose and evaluate the safety and tolerability of denintuzumab mafodotin. In addition, the trial is evaluating antitumor activity, pharmacokinetics, progression-free survival and overall survival. In this study, patients receive denintuzumab mafodotin either every three weeks or every six weeks. Patients with stable disease or better are eligible to continue treatment with denintuzumab mafodotin.

The key findings from an oral presentation by Craig Moskowitz, M.D. Clinical Director, Division of Hematologic Oncology, Memorial Sloan Kettering Cancer Center, confirm that the maximum tolerated dose of the trial drug was not exceeded after escalating to 6 milligrams per kilogram (mg/kg) every three weeks.

In this trial, which included 60 patients evaluable for response, 23 patients (38%) achieved an objective response (OR), including 14 patients (23%) with a complete remission and nine patients (15%) with a partial remission. Thirteen patients (22%) achieved stable disease and 24 patients (40%) had disease progression.

Adverse events
The most common adverse events of any grade occurring in more than 15 percent of patients were blurred vision (63%); dry eye (53%); fatigue, keratopathy and photophobia (39% each). Ocular symptoms were reported in more than 70% of patients. Symptoms were mostly Grade 1/2 and were managed with steroid eye drop treatment and dose modifications. Eighty-eight percent of patients with Grade 3 or 4 keratopathy experienced improvement and/or resolution within a median of five weeks.

B-Lineage Acute Leukemia
Data were reported from 72 adult patients with relapsed or refractory B-ALL and highly aggressive lymphomas, including B-cell lymphoblastic lymphoma (B-LBL) and Burkitt lymphoma. The median age of adult patients was 45 years and the median number of prior systemic therapies was two, with 20 patients (28%) having received a prior allogeneic stem cell transplant. [2]

The primary endpoints of the ongoing clinical trial are to estimate the maximum tolerated dose and to evaluate the safety of denintuzumab mafodotin (SGN-CD19A). In addition, the trial is evaluating antitumor activity, pharmacokinetics, progression-free survival and overall survival. In this dose-escalation study, patients received denintuzumab mafodotin in Schedule A (40 patients) at 0.3 to 3 mg/kg weekly or Schedule B (32 patients) at 4 to 6 mg/kg every three weeks.  Key findings of this trial show that of the 56 B-ALL adult patients evaluable for response, six patients (19%) treated weekly achieved a composite complete remission (complete remission or complete remission with incomplete platelet or blood recovery) and nine patients (38%) treated every three weeks achieved a composite complete remission. The median duration of response was 27 weeks. Fifty-four percent of patients across both schedules achieved cytoreduction of greater than 50%.

Furthermore, trial results show that in the ten patients with Philadelphia chromosome positive (Ph+) B-ALL, five patients (50%) achieved a complete remission and one patient (10%) had a partial remission. Ph+ B-ALL represents 20 to 30% of adult patients and carries a dismal prognosis, with higher rates of relapse and lower overall survival.

Maximum tolerated dose and adverse events
The maximum tolerated dose or MTD, the highest dose of the trial drug that did not cause unacceptable side effects established by testing increasing doses on different groups of people until the highest dose with acceptable side effects is found, was not reached in patients treated weekly but was identified at 5 mg/kg in patients treated every three weeks.

In the study, 43 patients (60%) developed ocular symptoms, of which 91% were Grade 1/2. These included blurred vision (39%), dry eye (25%) and photophobia (19%). Ocular symptoms were managed with steroid eye drop treatment and dose modifications. Keratopathy was observed in 34 patients, of whom 22 patients had Grade 3/4 events. The majority of patients with Grade 3/4 events had improvement or resolution with a median time of approximately four weeks.

Trials with denintuzumab mafodotin (SGN-CD19A) phase I clinical trials are ongoing. Separately, a randomized phase II trial has recently initiated evaluating 19A in combination with R-ICE chemotherapy for second-line DLBCL. In addition, a phase 2 clinical trial in frontline DLBCL is planned to begin in 2016.

SGN-CD19B
A preclinical analysis evaluated the activity of SGN-CD19B, a new ADC consisting of an anti-CD19 antibody attached to a highly potent DNA binding agent called a PBD dimer, in multiple B-cell malignancy models. Data to be presented in an oral session demonstrate that SGN-CD19B exhibits antitumor activity against a broad panel of CD19-expressing B-cell malignancies, inducing durable tumor regressions and improved survival in multiple preclinical models of NHL and B-ALL. Based on these data, a phase 1 clinical trial evaluating SGN-CD19B in NHL is planned to start in 2016. [3]

Dramatic advances
“[These and other] studies presented [during the 57th American Society of Hematology (ASH) Annual Meeting and Exposition] showcase dramatic advances that are revolutionizing the way we treat patients with blood cancers, as well as the promise of novel approaches yet to come,” noted Gary Schiller, M.D., Professor of Medicine in the Division of Hematology/Oncology at the University of California, Los Angeles School of Medicine.

“We are seeing how scientific discoveries in the lab are translating into real, positive clinical impact. Patients, especially those with challenging diseases, can be heartened by the tremendous expansion of options and new therapeutic approaches,” Schiller concluded.