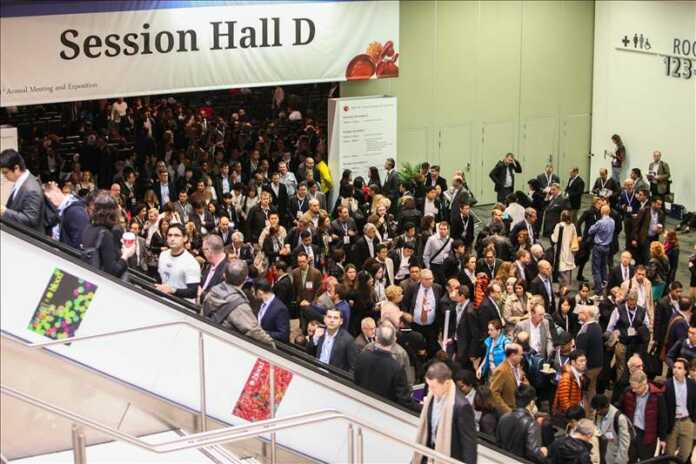 Four-year overall survival (OS) data from the brentuximab vedotin (Adcetris®; Seattle Genetics) pivotal Phase II clinical trial in relapsed or refractory systemic anaplastic large cell lymphoma or  ALCL shows that at a median follow up of 46.3 months, the estimated four-year survival rate was 64%. The data were presented at the 56th American Society of Hematology (ASH) Annual Meeting and Exposition, taking place in the Moscone Center, San Francisco, CA, December 6-9, 2014.[1] The meeting brings together the both clinicians and scientists around the world who are working to conquer blood diseases.

Brentuximab vedotin  is an antibody-drug conjugate or ADC directed to CD30, which is expressed in classical Hodgkin lymphoma (HL) and systemic ALCL, a type of T-cell lymphoma. The ADC comprises an anti-CD30 monoclonal antibody attached by a protease-cleavable linker to a microtubule disrupting agent, monomethyl auristatin E (MMAE), utilizing Seattle Genetics’ proprietary technology.

The ADC employs a linker system that is designed to be stable in the bloodstream and release MMAE upon internalization into CD30-expressing tumor cells.

“Historical outcomes for patients with relapsed T-cell lymphoma, including systemic ALCL have been poor, with a median overall survival of 5.5 months and a median progression-free survival of 3.1 months. The four-year survival data from the pivotal trial in systemic ALCL demonstrate brentuximab vedotin’s activity in the treatment of this disease, with an estimated four-year survival rate of 64 percent and a median progression-free survival of 20 months,” explained Clay Siegall, Ph.D., President and Chief Executive Officer of Seattle Genetics.

“The data estimate that more than 60% of the relapsed or refractory ALCL patients treated with brentuximab vedotin in this study are alive at four years, which may positively redefine outcome expectations in this difficult to treat cancer,” said Dirk Huebner, MD, Senior Medical Director, Oncology Therapeutic Area Unit, Takeda Pharmaceutical Company.

“The fact that a third of all patients treated in the trial remain in complete remission with no evidence of disease after a median follow up of 46 months suggests the difference brentuximab vedotin can make in this disease.”

Four-Year Survival Data from an Ongoing Pivotal Phase II
A pivotal, single-arm clinical trial was conducted in 58 relapsed or refractory systemic ALCL patients to assess the efficacy and safety of single-agentbrentuximab vedotin . In addition, the trial was designed to determine duration of response, progression-free survival (PFS) and overall survival (OS). In this trial, patients received 1.8 milligrams per kilogram (mg/kg) of brentuximab vedotin administered through a 30-minute intravenous infusion every three weeks for up to 16 cycles. As previously reported, 86% of patients on the trial achieved an objective response, including 59% with a complete response (CR) and 28% with a partial response (PR). Data from long-term patient follow up in this pivotal trial highlighted by Barbara Pro, MD, Thomas Jefferson University, and include:

Adverse Reactions and Drug Interactions
According to the Summary of Product Characteristics (Europe) and the Highlights of Prescribing Information (USA), brentuximab vedotin was studied as monotherapy in 160 patients in two Phase II trials. Across both trials, the most common adverse reactions (≥20%), regardless of causality, were neutropenia, peripheral sensory neuropathy, fatigue, nausea, anemia, upper respiratory tract infection, diarrhea, pyrexia, rash, thrombocytopenia, cough and vomiting.

The four-year survival data from an ongoing pivotal phase II study of brentuximab vedotin in patients with relapsed or refractory systemic anaplastic large cell lymphoma shows the most common adverse events of any grade to be peripheral neuropathy (57%), nausea (40%), fatigue (38%), pyrexia (34%) and diarrhea (29%).

The most common Grade 3 or 4 adverse events occurring in at least five percent of patients were neutropenia (21%), peripheral neuropathy (17%), thrombocytopenia (14%), anemia (7%) and recurrent ALCL (5%).

Furthermore, concomitant use of strong CYP3A4 inhibitors or inducers, or P-gp inhibitors, has the potential to affect the exposure to MMAE.