The 15th annual Cambridge Healthcare Institute’s PepTalk – Protein Science Week, one of the largest gatherings of protein science researchers in the world, was recently held in San Diego, CA. As part of Peptalk’s antibody therapeutic pipeline, the next-generation cancer immunotherapeutic conference featured many experts working across various science R&D stages focusing on advancing immunotherapeutic targets, strategies, and technologies (including the development of bispecific antibody development). Among the many subjects, the conference included discussions on bispecific antibodies, giving researchers and experts a chance to share and discuss pre-clinical data as well as progress made, novel and the potential future technologies. 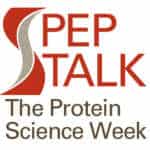 Bispecific antibodies are composed of two monoclonal antibody fragments, which allow for the binding of two different antigens. The use of bispecifcs for immunotherapy by recruiting immune effectors cells to tumor cells has been an idea in development for over 25 years. However, low efficiacy, severe adverse effects, and high immunogenicity have been very difficult factors to overcome. Fortunately, new developments in the field of antibody engineering have created improved bispecific antibodies with improved properties and lowered toxicities. [1]

BiTE® Immunotherapy
Recently, the approval of blinatumomab (Blincyto®; Amgen) has verified the company’s Bispecific T-Cell Engager (BiTE®) Immunotherapy platform. Richard Smith, Ph.D., who is the Director of Research for Protein Technologies at Amgen spoke at the conference about how the Amgen team is working to further advance the development of this platform through a streamlined and highly efficient research and development approach.[2] In the Monday afternoon session, Smith noted that the company’s efforts to improve success rates in the research and development stages is based their strength in using a biology-based approach to identify and pursue highly promising programs. Unlike other companies that aim to maximize molecules in a drug pipeline in order to provide more chances that one may succeed, researchers at Amgen prioritize targets based on genetic studies showing sufficient influences on a specific disease risk. The use of this strategy allows the company to lower drug development costs while heightening research productivity.

Smith also noted that the technology used by the company permits a  very “flexible and nimble” process while getting molecules more quickly.

In the early stages of development, there is a desire to lay the groundwork for developing a therapeutic which is made possible by relying heavily on Xenomouse® technology for human antibody production (the transgenic mice – xenomouse technology – produces human immunoglobulin light and heavy chains).  The strategy for the creation of Xenomouse used in novel drug development aims at recapitulating the human humoral immune system in mice. This requires inactivation of mouse antibody–production machinery and the stable cloning and introduction of human immunoglobulin heavy and light chain loci.

XTEN® Platform
Posters presented at the conference exhibit hall also added to the array of information on BiTE technologies. Amunix, a biotechnology company based in Mountain View, California, presented data discussing their proprietary recombinant half-life extension polymer, XTEN®. The company’s protein linker technology can be genetically fused to peptides and proteins, or, alternatively, be chemically conjugated to peptides, proteins, peptidomimetics and cytotoxic drugs.

As part part of their development process, Amunix has recently expanded the use of XTEN, their unstructured biodegradable protein polymers, to include BiTEs. In an effort to enhance therapeutic index and circulating half-life of BiTEs, the novel drug linkers are used in Amunix’s Protease-Triggered Immune Activators or ProTIAs.

These ProTIAs are composed of a bispecific antibody attached to a shielding XTEN, which, due to its size, is designed to reduce uptake of the ProTIA by normal tissue.  Furthermore, it reduces non-specific T-Cell activation and increase circulation half-life. The shielding XTEN can be released through tumor protease cleavage of an incorporated release site, which will then allow for tumor penetration and T-cell activation with the released bispecific antibody to proceed.

The poster presented the results of an in vitro cytotoxicity study, which showed that an the intact ProTIA used was over 30 times less active then the highly potent cleaved version, and the non-cleavable ProTIA was over 300 times less active than when it was cleaved. Amunix expects that ProTIAs will provide significant benefits when compared to existing T-Cell activators. [3]

Increasing health related Quality of Life
Although similar to other half-life extension technologies, XTEN offers number of advantages not seen other approaches. In addition to increasing the size of therapeutic molecules and prolonging their presence in the bloodstream, the XTEN polymer is biodegradable and very hydrophilic, does not accumulate in tissue, does not produce toxic metabolites, minimizes immunogenicity risks, and increases the solubility of therapeutics to which it is attached.  When treating patients, these advantages significatltly reduce the frequency of drug injections required  – and  – as a result, increases the health related Quality of Life (hrQoL) of patients.

Another advantage is that XTEN-technology makes drug design and development more flexible. XTEN-based drugs can be multivalent and/or multispecific.  This makes it possible to combine different classes of active moieties and/or contain different XTEN segments to maximize in vivo time action. In addition, XTEN-drug conjugates can be linked to a number of different tumor specific- binding domains (including antibody-fragments, peptides and metabolites) al-the-while maintaining perfect product homogeneity, and as a result, does not require extensive purification.

Based on various pre-clinical studies, Sun described CD20-TDB as a bispecific antibody which displays a potential therapeutic use for B-cell malignancies. Multiple marine models have shown that CD20-TBD was highly active in killing B-cells both in vivo and in vitro. Furthermore, B cells were substantially depleted in peripheral blood and lymphoid tissues of cynomolgus monkeys when treated with the CD20-TBD. Sun pointed out that only two hours after a single dose of treatment (1 mg/kg), B-cells were no longer detected in the peripheral blood. [4]

Cytokines were detected by diminished overtime. According to Sun, the main hypothesis for this cytokine presence was that it was attributed to activation induced cell death, which highlights the difference between using murine models and non-human primate models. More importantly, Sun added that non-target driven T-cell activation was successfully avoided. “ The T-cell activation is only detected in the presence of both target and antibody,” she stated. “Only when you have the T-cells, target cells, and antibody do you see robust T-cell activation,” Sun added. The results of the CD20-TDB pre-clinical trials provide rationale for progression to clinical testing, and researchers at Genentech are excited about it’s future prospects.

Updated Results for [Fam-] Trastuzumab Deruxtecan in Patients with HER2 Mutated...