Brentuximab vedotin is an antibody-drug conjugate or ADC comprising an anti-CD30 monoclonal antibody attached by a protease-cleavable linker to a microtubule disrupting agent, monomethyl auristatin E (MMAE), utilizing Seattle Genetics’ proprietary technology. Antibody-drug conjugates employ a linker system that designed to be stable in the bloodstream but to release MMAE upon internalization into CD30-expressing tumor cells, which are expressed in classical HL and systemic anaplastic large cell lymphoma (sALCL).

“We are focused on exploring the potential to improve outcomes in earlier lines of HL by incorporating ADCETRIS in novel settings, and the data presented at the 2014 BMT Tandem Meetings illustrate this goal,” said Jonathan Drachman, M.D., Chief Medical Officer and Executive Vice President, Research and Development, at Seattle Genetics. “The interim data presented today 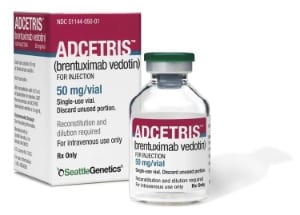 evaluating brentuximab vedotin and bendamustine combination therapy in the salvage HL setting are encouraging, showing a complete remission rate of 77%, with another 15% of patients, who currently remain on treatment, achieving early partial remissions. In addition, a pooled analysis for the overall population in the AETHERA phase III clinical trial was presented, including demographic data, baseline disease characteristics and treatment exposure. We look forward to presenting efficacy and safety data from the AETHERA trial in the second half of 2014.”

First salvage setting
The interim results from another ongoing phase I/II clinical trial were reported from 23 patients with HL after first relapse. The multi-phase study was divided into two cohorts to determine the recommended dose and tolerability of brentuximab vedotin in combination with bendamustine and to assess the complete remission rate associated with combination use.[3]

Infusion reactions considered related to combination therapy were reported as serious adverse events in six patients and led to treatment discontinuation for three patients. Symptoms included rash, hives, itching, shortness of breath, wheezing, throat tightness, fever, chills and hypotension. As a result, the protocol is being amended to require premedication with corticosteroids and antihistamines.

The primary endpoint is progression-free survival. Randomization was stratified by risk factors at the time of initiating salvage therapy (refractory, relapsed within 12 months or relapsed after 12 months with extranodal involvement) and by response to salvage therapy (complete remission, partial remission or stable disease). The presentation reviewed the demographics and baseline disease characteristics of the 329 patients who enrolled in the study. Key findings for the pooled, blinded data include: