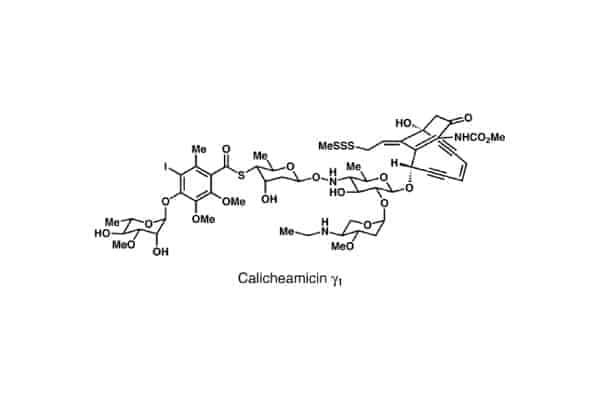 Calicheamicin (also known as LL-E33288 antibiotics) was first discovered in the mid-1980s by a scientist from American Cyanamid Company’s medical research division, Lederle Laboratories (now Pfizer) while on vacation in Kerrville, Texas (USA).

The scientist collected a soil sample, which consisted of caliche clay, and sent it back to the lab for testing. In the lab scientists grew a culture of the chalky soil sample and found that a tiny bacterium (Micromonospora echinospora ssp. calichensis ) within the sample produced a compound that was found to be an incredibly potent cytotoxic agent. [1] [*]

Calicheamicin is so potent (between 1,000 to 10,000 times more cytotoxic to normal cells than anticancer drugs already on the market. With optimal dose at 0.5–1.5 μg/k calicheamicin, it is approximately 4,000 times more active than doxorubicin) that it also destroys the DNA of normal cells and, as a result, cannot not be used as a single agent to treat patients.

In one study transcriptional effects were observed as early as 2 min into drug exposure.[3] Among these effects were the upregulation of two nuclear proteins encoding a Y’-helicase (a subtelomerically encoded protein whose function is to maintain telomeres) and a suppressor of rpc10 and rpb40mutations (both rpc10 and rpb40 encode RNA polymerase subunits). The researchers noted that with longer calicheamicin exposure, genes involved in chromatin arrangement, DNA repair and/or oxidative damage, DNA synthesis and cell cycle checkpoint control as well as other nuclear proteins were all differentially expressed. Furthermore, ribosomal proteins and a variety of metabolic, biosynthetic, and stress response genes were also altered in their expression. [3]

Linking with monoclonal antibodies
George Ellestad, Janis Upeslacis and Philip Hamann (Wyeth Research; Pearl River, NY, now Pfizer) began studying calicheamicin in order to better understand its mechanism. Together, they devised a plan to link calicheamicin to a monoclonal antibody that specifically targeted cancer cells. In this way, they were able to limit harming healthy cells, while the linked antibody took the highly potent calicheamicin directly to the tumor cell.

In 2004 Ellestad, Upeslacis and Hamann were honored by the American Chemical Society for their contribution to the isolation and structural elucidation of the calicheamicin family of enediynes, including calicheamincin, the antitumor antibiotic that formed the basis of gemtuzumab ozogamicin (Mylotarg®; Pfizer/Wyeth).

A new class of drugs
On May 17, 2000, almost 20 years after its discovery, the U.S. Food and Drug Administration (FDA) approved gemtuzumab ozogamicin, the first monoclonal antibody-drug conjugate or ADC linking calicheamicin to a monoclonal antibody. The drug consists of N-acetyl-γ-calicheamicin covalently attached to the humanized anti-CD33 IgG4 κ antibody (hP67.6) via a bifunctional linker (with a DAR of 2 – 3 molecules of calicheamicin per molecule of mAb).[4]

Upon internalization of gemtuzumab ozogamicin, the calicheamicin prodrug is released by hydrolysis of the hydrazone in the lysosomes of the CD33+ target cells.  The enediyne drug is then activated by reductive cleavage of the disulfide bond. In order to prevent premature release of calicheamicin by circulating reduced thiols, such as glutathione, the disulfide linkage is stabilized by two methyl groups close to the disulfide.[4]

Gemtuzumab ozogamicin was the very first drug in its class (antibody-targeted chemotherapy agents) and is used in the treatment of acute myelogenous leukemia (AML), a virulent and often fatal form of cancer in which certain white blood cells become cancerous and rapidly accumulate in the bone marrow, preventing normal marrow from growing and functioning properly. It is among the most serious forms of adult leukemia, with a relatively high fatality rate. Gemtuzumab ozogamicin specific antibody recognizes CD33, a cell-surface molecule which is abundant on AML cells but absent from normal blood stem cells, the seeds from which normal blood and immune cells originate. [5]

Post marketing – and follow-up trials
Pfizer voluntarily pulled gemtuzumab ozogamicin from the market in 2010 due to post-marketing evidence of lack of efficacy, as well as unacceptable toxicity. However, in ongoing clinical trials, Sylvie Castaigne, MD, of the Hôpital de Versailles in France, and lead investigator from the Acute Leukemia French Association (ALFA) study, and her colleagues, are using a fractionated dosing regimen for gemtuzumab ozogamicin. Instead of using the standard dose of 9mg/m2, which does not allow the drug to be used in combination with conventional chemotherapy, the researchers dose the drug in three increments of 3mg/m2 over a week’s time, which enables a combination with chemotherapy. The results show that this altered regimen limits toxicity and boost overall efficacy. The researchers also noted that overall adverse events were substantially lower than those historically observed with the standard, single dose infusion of gemtuzumab ozogamicin.

[*] Calicheamicin is part of a class of toxic chemicals called Alkynes, which are generally not very useful as pharmaceuticals. However, specific Alkynes known as enediynes possess a very strong and aggressive anti-tumor compound. These molecules are cyclic and contain an alkene (double bond) in between two alkyne (triple bonds) functions, therefore the name ene < alkene and diyne < two alkynes.

What are Duocarmycin analogues?