Antibody–drug conjugates (ADCs) or immunoconjugates have shown to offer the unique benefits of a targeted therapeutic strategy combined with the best features of both therapeutic monoclonal antibodies (mAb) and potent small-molecule cytotoxic drugs through a linker that is stable within systemic circulation but cleaves within the target cells, to create a single moiety that is highly specific to numerous cancer cells.

Simply states, the principle behind of antibody-drug conjugates is based on the monoclonal antibody guiding the toxic agent specifically to diseased tissue, while minimizing the peripheral damage to healthy tissue.[5]

The development of ADC involves a critical understanding of target antigen selection, conjugate internalization by tumor cells, drug potency and stability of the linker between drug and antibody. Furthermore, understanding the conjugation methods, drug-to-antibody ratio or DAR, the effects of drug conjugation on antibody properties and kind of linker are critical in developing safe and effective ADCs using highly potent anticancer agents. [1]

One of the major challenge in the in the development of safe and effective antibody-drug conjugates has been the generation of suitable chemical linkers between the cytotoxic drug and the monoclonal antibody. While the synthesis of linker chemistry is quite complex and several aspects must be critically balanced to guarantee efficacy, ultimately, the nature of the chemical linker being used shapes the release profile of the cytotoxin.

As a result, linkers play a profound role in determining the pharmacokinetic properties, therapeutic index, selectivity and the overall success of the ADC.  Hence, researchers involved in the development of ADCs continue to investigate the available linker technologies.

Important considerations
Among the important considerations is the fact that monoclonal antibodies have circulation half lives of multiple days, hence, a linker with stability at systemically relevant pHs for multiple days is preferable. Also, conjugation of the linker and toxin should not adversely affect the stability of the monoclonal antibody.

Limited number of linkers
The majority of antibody-drug conjugates currently in clinical development use only a limited number of chemical linkers, including hydrazones, disulfides, peptides or thioether bonds.  Principally, theses chemical linkers exploit the differences in intracellular pH, reduction potential or enzyme concentration to trigger the release of the cytotoxin in the cell. 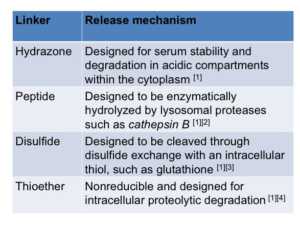 One of the unique features of ADCs is that they offer a unique-targeted therapeutic strategy by combining the best features of both antibodies and small-molecule drugs to create a single moiety that is highly specific and cytotoxic.

Chemically labile linkers, such as hydrazones and disulfides, may offer limited plasma stability. Peptide-based linker technologies may offer better controled drug-linker stability and drug release. Peptidic bonds are also expected to have good serum stability. Cleavable dipeptide linkers like Val-Ala and Val-Cit rely on processes inside the cell to liberate the payload, as they undergo rapid hydrolysis in the presence of lysosomal extracts or purified human cathepsin B.

Two predominant technologies
In the currently U.S. FDA approved antibody-drug conjugates two common ways to link cytotoxic anticancer agents payloads include non-cleavable (a non-cleavable thioether linker that releases the drug after the monoclonal antibody is degraded) and cleavable linkers (a peptide linker cleaved by cathepsin B).

For example, brentuximab vedotin (Adcetris®; Seattle Genetics) or cAC10-valine-citrulline-MMAE, features a  protease-sensitive dipeptide linker designed to release MMAE by lysosomal cathepsin B in target cells but maintain a stable linkage and attenuate drug potency in circulation, while ado-trastuzumab emtansine (Kadcyla™; Genentech/Roche) contains the non-cleavable linker SMCC. In either case, the stability of the antibody-drug conjugate during delivery to the target site is key to achieving a desirable therapeutic index.[2]

Cleavable linkers
Cleavable linkers play a crucial role in the success of antibody-drug conjugates. They are stable in the blood circulation for a long period of time and efficiently releas their payload in the tumor microenvironment, for both the chemically labile linkers and enzyme cleavable linkers.

Chemically Labile Linkers
The chemically labile linkers, including acid-cleavable linkers and reducible linkers, are extensively applied to the ADCs since they are able to undergo fracture, increasing the acidity of the endosomal–lysosomal pathway and the concentration of glutathione inside cells.

Acid-Cleavable Linkers
Acid-cleavable linkers, such as hydrazone, are specifically designed to remain stable at the neutral pH of blood circulation, but undergo hydrolysis and release the cytotoxic drug in the acidic environment of the cellular compartments. These linkers have been associated with non-specific release of the drug in clinical studies.

One key example is BR96-Doxorubicin or BR96-Dox, which conjugates doxorubicin to the cysteine residues of a chimeric anti-Lewis Y (Le(Y)) monoclonal antibody via an acid-cleavable hydrazone linker.

Reducible Linkers
Reducible linkers take advantage of the difference in reduction potential in the intracellular compartment versus plasma. Reduced glutathione presented in tumor cells’ cytoplasma is up to 1000-fold higher than that present in normal cells’ cytoplasma, and the tumor cells also contain enzymes of the protein disulfide isomerase family, which may contribute to reduction of the disulfide bond in cellular compartments. The linkers of disulfide bonds keep conjugates intact during systemic circulation, and are selectively cleaved by the high intracellular concentration of glutathione, releasing the active drugs at the tumor sites from the non-toxic prodrugs.

Enzyme Cleavable Linkers
Unlike the chemically labile linkers discussed above, enzyme cleavable linkers take advantage of the abundance of hydrolytic enzymes with the specificity to recognize the sequences of peptides or patterns of carbohydrate in order to degrade peptides and carbohydrates. The different contents of these enzymes between the blood and lysosomal compartment ensure a well-designed ADC undergoes cleavage only in the lysosomal environment.

Peptide-Based Linkers
The peptide-based linkers are designed to keep ADCs intact in systemic circulation, and allow easy release of the cytotoxic drugs upon cleavage by specific intracellular proteases, such as cathepsin B.

Due to unsuitable pH conditions and serum protease inhibitors, these peptide linkers show greater systemic stability with rapid enzymatic release of the payload in the target cell, such as valine-citrulline(Val-Cit) dipeptide linker, phenylalanine-lysine (Phe-Lys) dipeptide linker.

In these cases, intracellular release of the cytotoxic anticancer drug relies on the fact that endosomes/lysosomes are acidic compartments that will facilitate cleavage of acid-labile chemical linkages such as hydrazone. In addition, if a lysosomal-specific protease cleavage site is engineered into the linker, for example the cathepsin B site in vcMMAE, the cytotoxins will be liberated in proximity to their intracellular targets. Alternatively, linkers containing mixed disulfides provide yet another approach by which cytotoxic payloads can be liberated intracellularly as they are selectively cleaved in the reducing environment of the cell, but not in the oxygen-rich environment in the bloodstream.

β-Glucuronide Linkers
Another type of enzyme-labile linker used in the development of antibody-drug conjugates is the β-glucuronide linker.  With this type of linker, the cytotoxic drug undergoes release and cleavage by β-glucuronidase, an enzyme present in lysosomes or the tumor interstitium abundantly presenting in lysosomes, and is overexpressed in some tumors.

Having hydrophilic properties, β-glucuronide linkers may reduce aggregation of the hydrophobic drugs and promote the solubility of the intact antibody-drug conjugates compared to dipeptide-based ADCs.