Home The Review Antibody-drug Conjugates What Are Customized ADCs? 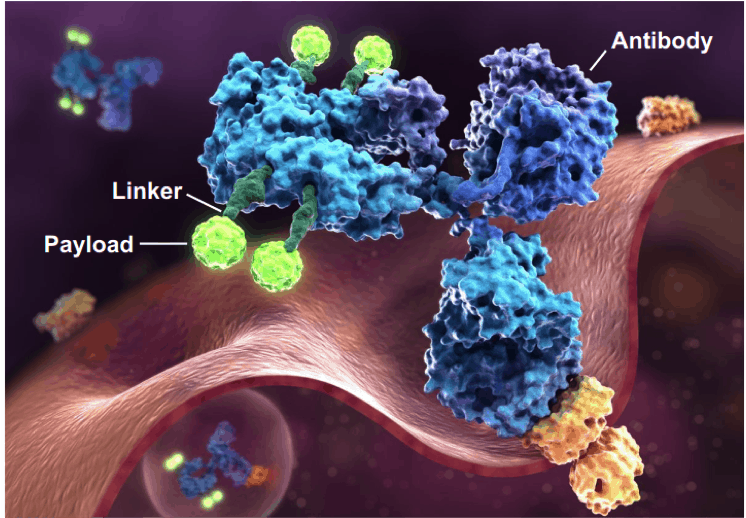 As innovative next-generation immunotherapeutic agents, antibody-drug conjugates (ADCs) are being developed worldwide as a major strategy to combat cancer and other immunological disorders. Customarily prepared antibody-drug conjugate (ADC) products refer to the conjugation of therapeutic antibodies against cancer surface antigens with different drug-linker complexes that serve the course of ADC development and evaluation. These high-quality custom ADCs are suitable for tasks such as proof-of-concept, target validation, as well as control to provide comparison in efficacy for new ADC development projects.

Adcetris is formulated by the conjugation of brentuximab, an anti-CD30 (also known as TNFRSF8) monoclonal antibody with payload monomethyl auristatin E (MMAE) via a cleavable peptide linker. Brentuximab is a chimeric IgG1 monoclonal antibody that is developed by grafting the mouse anti-CD30 antibody CDR onto a human Fc framework while the payload, MMAE, an antimitotic agent, is an auristatin derivative that inhibits mitosis by impeding tubulin polymerization. The linker used in Adcetris is a di-peptide Val-Cit (vc) linker with a core structure that is digested by cathepsin B in the lysosome upon internalization and trafficking to release MMAE at its most native form. The payload-linker is conjugated to the antibody via Cys residues. The Adcetris clinical trial showed a clear effect of this ADC against Hodgkin lymphoma and ALCL with increased long-term survival rates.

Kadcyla, also known as T-DM1, with the generic name trastuzumab emtansine or adotrastuzumab emtansine, is designed by conjugating of trastuzumab with DM1, a maytansinoid derivative via a non-cleavable SMCC linker. Briefly, the antibody portion of Kadcyla, trastuzumab (trade name Herceptin) is a humanized IgG1 monoclonal antibody that specifically targets HER2 while its payload, DM1, is also a mitosis inhibitor and functions by disrupting tubulin polymerization. The linker used in Kadcyla is a non-cleavable SMCC linker, which attaches the payload to the Lys residues on the trastuzumab. Kadcyla underwent a three-phase clinical study with an open-label dose escalation study in phase I that showed a 73% clinical benefit rate whereas the objective response rate (ORR) was 44 % in the first treatment plan.

Besponsa, with the generic name of inotuzumab ozogamicin, gained FDA approval in Aug 2017, making it the fourth ADC that hits the market in the past 6 years. This ADC is developed by Pfizer for the treatment of adults with relapsed or refractory B-cell precursor acute lymphoblastic leukemia. It is comprised of an anti-CD22 monoclonal antibody (Inotuzumab) conjugated with the payload N-acetyl-gamma-calicheamicin via a bi-functional 4-(4-acetylphenoxy) butanoic acid linker. The payload-linker portion of Besponsa is identical to that of Mylotarg and the payload-linker complex is conjugated via Lys residues of inotuzumab. With improved conjugation method, Besponsa shows better homogeneity and stability comparing to Mylotarg.

Creative Biolabs is recognized as the world leader for providing the most diverse portfolio of ADC development solutions for worldwide customers. We are always dedicated to assisting our clients with the most satisfactory customized ADCs. If you are interested in our products, please do not hesitate to contact us for more details.

What is the clinical landscape for ADCs?