With 12 approved drugs on the market, ADCs have become a powerful class of therapeutic agents in oncology and hematology.

Antibody-drug Conjugates (ADC) are empowered antibodies (mAbs) designed to harness the targeting ability of monoclonal antibodies by linking them to cell-killing agents. An ideal ADC has:

Mechanistically, antibody-drug conjugates exert their activity by (1) selective binding of the antibody to tumor, (2) internalization and (3) lysosomal degradation, and release of the cytotoxic payload, leading to cytotoxic cell death.

Antibody-drug conjugates or ADCs are a new class of highly potent biopharmaceutical drug composed of an antibody linked, via a chemical linker, to a biologically active drug or cytotoxic compound. Thes targeted agents combine the unique and very sensitive targeting capabilities of antibodies allowing sensitive discrimination between healthy and cancer tissues with the cell-killing ability of cytotoxic drugs.

To date, ten antibody-drug conjugates have received market approval and nearly 100 investigational ADCs are currently in pre-clinical and clinical trials.

Antibody-drug conjugates represent an innovative therapeutic application that combines the unique, high specificity, properties, and anti-tumor activity of monoclonal antibodies (mAbs) that are tumor-specific but not sufficiently cytotoxic, with the potent cell-killing activity of highly cytotoxic small molecule drugs that are unsuitable for systemic administration alone.

Because these agents are capable of delivering highly cytotoxic payloads directly to tumor cells they can be used to achieve high lethality toward the targeted cancer cells while leaving healthy cells unharmed.

In linking monoclonal antibodies with cytotoxic agents, scientists have been able to optimize the features of both components.

The key components of antibody-drug conjugates include a monoclonal antibody, a stable linker, and a cytotoxic agent to target a variety of cancers. The cytotoxic (anticancer) drug is chemically linked (conjugated using disulfide or non-cleavable thioether linker chemistry) to a monoclonal antibody that recognizes a specific tumor-associated antigen, making the drug combination very specific.

In simple terms, antibody-drug conjugates deliver “deactivated” cytotoxins to specific cancer cells. Once in the tumor cell – internalization – the cytotoxin is released after which it regains its full – cancer-killing – cytotoxic activity. In turn, this leads to rapid cell death. 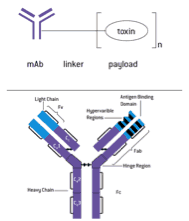 Monoclonal antibodies are attached to biologically active drugs by chemical linkers with labile bonds.  By combining the unique targeting of mAbs with the cancer-killing ability of cytotoxic drugs, antibody-drug conjugates allow sensitive discrimination between healthy and diseased tissue.  Antibody-drug conjugates are part of a specialized and technically challenging type of therapy combining innovations from biotechnology and chemistry to form a new class of highly potent biopharmaceutical drugs.

Conventional chemotherapy is designed to eliminate fast-growing tumor cells. It can, however, also harm healthy proliferating cells, which causes undesirable side effects. [4] In contrast, ADCs are designed to increase the efficacy of therapy and reduce systemic toxicity, often seen with small molecule drugs.

Antibody-Drug Conjugates deliver highly potent cytotoxic anticancer agents to cancer cells by joining them to monoclonal antibodies by biodegradable, stable linkers and discriminate between cancer and normal tissue. These linkers are either cleavable or non-cleavable.

Advances in linker technology needed to attach monoclonal antibodies to cytotoxic anticancer agents to allow control over drug pharmacokinetics and significantly improve delivery of a cytotoxic agent to cancer cells.

The antibody-drug conjugate is a three-component system including a potent cytotoxic anticancer agent linked via a biodegradable linker to an antibody. The antibody binds to specific markers (antigens or receptors) at the surface of the cancer cell. The whole antibody-drug conjugate is then internalized within the cancer cell, where the linker is degraded and the active drug released.

The focused delivery of the cytotoxic agent to the tumor cell is designed to maximize the anti-tumor effect of ADCs, while minimizing its normal tissue exposure, potentially leading to an improved therapeutic index. [1]

The mechanism of action (MOA) of antibody-drug conjugates is rather simple. When some portion of the antibody-drug conjugate is administered intravenously localizes to a tumor and binds to a target antigen on the cell surface of the tumor cell, the complex will be internalized into the cell. Following internalization, the internalized vesicles fuse with other vesicles and enter the endosome-lysosome pathway. In the lysosome, proteases in a mild acidic environment digest the monoclonal antibody to release free payloads, which then cross the lysosome membrane to enter the cytoplasm and/or the nucleus where they bind to the target molecule which, in turn, leads to cell death. [4]

The efficacy of antibody-targeted chemotherapy greatly depends on the specific binding of the targeting antibody-drug conjugate to the specific tumor antigen and on the internalization of the antigen-antibody complex to ensure focused delivery of the conjugated cytotoxic agent inside tumor cells.

The focused delivery of the cytotoxic agent to tumor cells maximizes the antitumor effect. It also minimizes normal tissue exposure that results in an improved therapeutic index and less damage to the surrounding, healthy tissue.

The monoclonal antibody affinity, the strength with which an antibody binds to an epitope (antigenic determinant), to the selected antigen is an important factor in ADCs. So-called high-affinity antibodies may have a greater uptake, increasing the therapeutic advantage. [5] However, while the uptake by the ‘outer layer’ of antigen-positive cells may be higher, the penetration and distribution throughout a ‘bulky tumors’ may be reduced.

There are thousands of cellular toxins from either natural sources or chemical synthesis, but only a very few are suitable as components for use in an Antibody-drug Conjugate (ADCs).  In the development of early ADCs, researchers used clinically approved chemotherapeutic drugs. One reason is that these agents were readily available and their toxicological properties were well known.

However, these early ADCs were only moderately potent and generally less cytotoxic for the targeted tumor cells than the corresponding unconjugated agents.

To solve this problem, scientists started to look at compounds found to be too toxic when tested as a stand-alone chemotherapeutic agent. But the number of these high potent toxins, generally 100 to 1,000 times more toxic than traditional anticancer agents, and are stable, is quite limited.

The cytotoxicity of the inhibitors of tubulin polymerization such as the maytansinoids (maytansine; DMs), dolastatins, auristatin drug analogs, and cryptophycin are related to their ability to inhibit cell division by binding tubulin, which arrests the target cell in the G2/M stage of the cell cycle resulting in apoptosis. These agents include the duocarmycin derivatives such as CC-1065 analogs and duocarmycin are DNA alkylating agents, the enediyne antibiotics including esperamicin and calicheamicin which catalyze DNA double-strand breaks and pyrrolobenzodiazepine (PBD), a DNA minor groove binding agent. Pyrolobenodiazepine (PBD) has shown in vitro cytotoxic potency against human tumor cell lines at 20pmol/L in the cell culture medium. [6]

What Are Biological Therapies For Cancer?

What are targeted therapies?