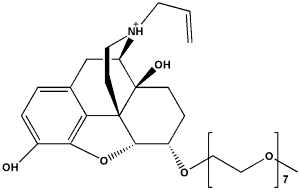 Pharmaceutical companies such as NEKTAR and AstraZeneca have made use of attached PEG linkers to small molecule drugs. OBD and OIC medications such as Movantik (naloxol) incorporate monodispersed PEG linkers to enhance the efficacy of the drug. Movantik includes an m-PEG7 linker. The introduction of this linker to Movantik reduced transport across the blood-brain barrier preventing side-effects to the central nervous system.