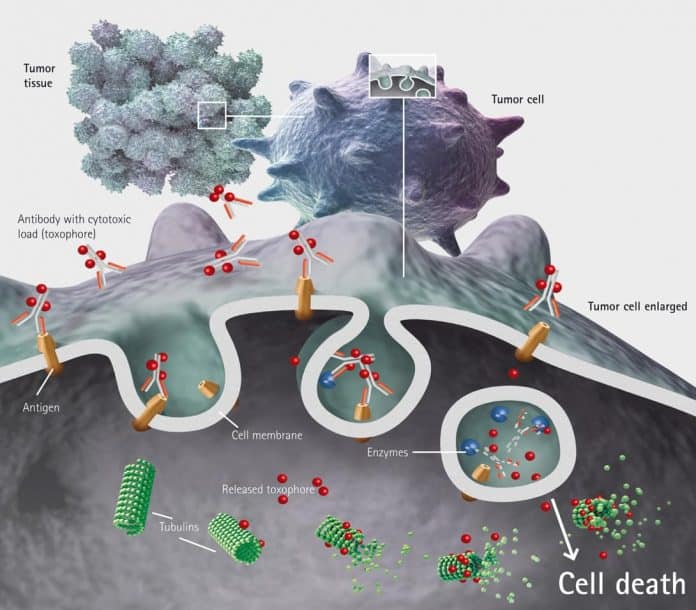 Antibody-drug conjugates (ADCs) are a new implementation of an old idea: using antibodies to deliver toxic payloads directly to tumor cells. The antibody serves as a molecular “global positioning system” to locate tumor cells; the payload is a highly toxic agent connected to the antibody through a linker molecule. Early ADCs used non-humanized antibodies and beta-emitting radionuclide payloads. The antibodies, themselves antigenic, raised human anti-mouse antibodies in patients, and the radionuclides were difficult to acquire and work with. Connecting protein to payload was a metal complexer similar to EDTA, connected to a carbon chain of suitable length.

Not surprisingly, these agents were a bust, although they have returned in the form of antibody-radionuclide conjugates (ARCs) which, given advances in antibodies and complexation chemistry, have enjoyed modest success, particularly as diagnostics.

Today’s ADCs use humanized antibodies, highly cytotoxic organic payloads, and linkers designed to retain the cell-killing agent until the ADC has found its target then, after the cell internalizes the ADC through surface receptors, facilitates payload release into the cell.

Zipping a protein, small molecule drug, and a linker together greatly complicates the characterization of ADCs, which regulators demand before approving human trials. Since a protein contains numerous conjugation sites—usually amino acids containing hydroxyl, amine, or thiol groups—ADC drug products are heterogeneous mixtures containing anywhere from one to about ten payload moieties. Since the payloads are far too toxic to administer as systemic chemotherapy agents, the conjugate must remain intact until it reaches the inside of the cell. Side effects arise from premature payload release and off-target affinities. As expected manufacturers must take great care to protect workers from exposure to both ADCs and their constituents during production.

Unlike antibodies or even small molecule cancer agents, we ask a lot of three-component ADCs. The antibody must be specific for tumor epitopes, otherwise it would destroy healthy cells, and its target affinity should not diminish appreciably after conjugation. The drug component should have very high anti-tumor activity since only a fraction of the dose is delivered.

Four ADCs are currently approved in the U.S., all for cancer treatment, with approximately 175 in clinical testing, including in Phase 3. According to a report by Allied Market Research, the global market for ADCs was $1.4 billion in 2016, and is estimated to reach $3.2 billion by 2023, an average annual growth rate of 12.9%.

Combining chemistry, biology
Creative Biolabs, an antibody and chemistry services company, has a unique perspective on the business of ADCs. Originally founded as an antibody company, Creative maintains an organic chemistry group to assist clients with linker chemistry and design.

Since the safety and effectiveness of ADCs depends on the performance of all three components—think chains and weak links—the scientific, medical, and regulatory considerations increase several-fold compared with designing an antibody, payload, or linker molecule independently. Developers try to minimize issues by using well-characterized antibodies, toxins, and linkers—low-hanging fruit, so to speak—but this approach raises serious intellectual property issues, according to Yuning Chen, Ph.D., project manager at Creative.

“Most development-stage ADCs use payloads that are either transcription inhibitors, or work by damaging tubulin ﬁlaments or DNA. The philosophy thus far has been not to look for new payloads as long as agents are out there that do the job. But if the ADCs work there will be patent entanglements to deal with.”

Current payloads target known cellular pathways related to tubular dynamics and DNA integrity. Chen believes that targeting relatively unknown or less-accessible cellular functions could greatly expand the potential of ADCs, while creating novel intellectual property that might be spun off into non-ADC therapeutics. “New payload molecules could be game-changers.”

Linkers and antibodies also tend to be covered by patents, Chen says. “The acronym ADC has three letters, and all three can lead to IP issues because these components tend to be proprietary, so using them in a commercial product will involve licensing.” The potential even for patent battles between competing inventors also exists.

The challenge for payloads is discovering highly toxic compounds that are amenable to chemical modification, and will stay put until the ADC is internalized by the target cell. Payload molecules also tend to be hydrophobic. One such addition to a protein would not affect physicochemical properties significantly but ADC developers aim for multiple payloads per antibody, which can promote ADC aggregation.

Chen believes that antigen selection is the “fourth dimension,” and possibly the critical ingredient of future ADC development.

Linker chemistry in general can be quite diverse, given the widely diverse applications in which chemical linkages are required. However as with payloads, ADC linker choices are in practice quite limited. Creative works mostly with hydrazones, disulfides, thioethers, and, the most popular choice today, dipeptides. “We’ve gone through several generations of linkers, and although peptides are the most common in use today, there is still plenty of room for improvement in terms of increasing linker hydrophilicity, to make the overall ADC structure less hydrophobic, and thereby less prone to aggregation. This could also be achieved through development of novel linker-payload combinations,” Chen tells Biocompare.

A great deal of antibody optimization and target validation has already occurred within the therapeutic, diagnostic, and reagent industries. ADC developers have relied heavily on these efforts by employing antibodies that are already well characterized.

“Antibodies used in ADCs must meet stringent criteria,” Chen explains, “and that has as much or more to do with the antigen as with the antibody.” Since payloads are highly toxic, off-target release is to be minimized at all costs. This is achieved to a degree by selecting highly specific antibodies, but Chen suggests that developers of next-generation ADCs might do well to consider alternative target sites. “The challenge will be to discover new antigens, and build future ADCs around as-yet discovered antibodies to these targets.”

How do ADCs work?