Monoclonal antibodies (mAbs) or monospecific antibodies are a class of antibodies isolated in the laboratory from a single clone of a unique parent cells or a cell line. They consist of identical antibody molecules. Monoclonal antibodies have complex secondary and tertiary structures.  These structures are subject to post-translational modification such as protein glycosylation, a process which includes the addition of a carbohydrate moiety to a protein molecule.  This processhelps in the proper folding of proteins, stability and in cell to cell adhesion commonly needed by cells of the immune system.

One of the advantage of monoclonal antibodies is that they are so specific that, unlike chemotherapy, mAb based treatment may only have mild side effects.  A number of  mAbs have proven to be more useful against cancer and, over the last 20 years, the U.S. Food and Drug Administration (FDA) has approved about a dozen mAbs to treat certain cancers. 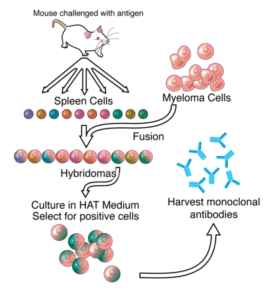 Köhler and Milstein immortalized antibody-producing cells by fusing them with a myeloma cell line which made the production of mAbs with predefined specificity possible. [1]

Since this first treatment, many advances in molecular technology have made it possible to synthesize highly customized molecules combining their specificity with enhanced efficacy.

Unconjugated monoclonal antibodies
Therapies with unconjugated mAbs depend on host immune effector mechanisms such as antibody-dependent cell-mediated cytotoxicity or ADCC and complement-dependent cytotoxicity or CDC. Direct antiproliferative effects induced by mAb binding to the tumor cell may also play a role. Early on, research showed that therapy with a single-agent unconjugated mAb can induce the development of mechanisms of resistance in a great number of patients.