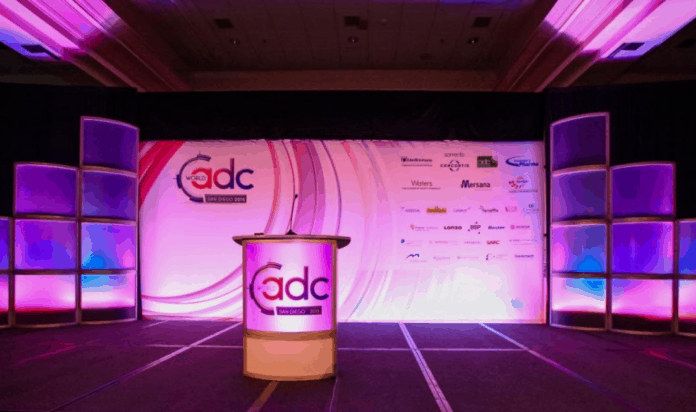 We have something a little different in store for today. Today is a feature on the 10th Annual World ADC, held October 8-11, 2019 in the Manchester Grand Hyatt San Diego, California, that I have been wanting to write for all of the scientists in lab who create the data behind the wonderful slides presented at World ADC but might not get to actually attend the conference itself.

This conference is clearly the best place for ADC folks to get together and discuss the latest and greatest in the world of ADC. The talks range from an always great clinical trial overview from the team at Beacon, to detailed analytical advancements, and of course, the CDMOs giving their updates on the latest advancements in the realm of custom manufacturing.

I was able to get approval from Letrishka Anthony at Beacon Intelligence to show this slide from her always awesome update on the landscape of ADCs in development. While her deck is not public, they always share it with all attendees of World ADC, so if anyone in your company has attended, then you can ask them to share it with you, and I would highly recommend that you do.

Since I end up doing a significant amount of opining on the world of ADC here in these articles, I thought that I would get some other opinions involved so that you can see the perspectives of people beyond just myself.

So for this article, we have a panel of ADC experts who were willing to humor me and to participate in one of these articles along with me. Their responses are mostly unedited, and then my commentary follows below.

So without further delay, you expert panel is:

Q #1: The dominant theme of World ADC 2019 was ….
GS: Too difficult to wrap everything up into one theme. EH: Improving Safety/Tox via linkers & via non-microtubule inhibitors like DS8201a, PBD prodrugs/hybrids, and side-shield linkers with PEG attachments. MS: Widespread success, some spectacular, across multiple indications can be achieved with the right combination of target and proven linker-payload technology (vedotin, DXd). CL: Expanding the therapeutic window/index for ADCs. JL: ADCs are alive, we will see more approvals! JS:I agree with Mike on this one, as the broad theme for me was “Optimism”. The ADCs that are in late-stage trials and beyond are really showing promise and the excitement in the room was palpable.

Q #2) What presentation stands out in your mind the most?
GS: Philip Howard’s and David Thurston’s talks stood out. Both these talks were focused on one thing: To understand the reasons for the failures and then designing newer and potentially safer molecules. Howard’s glucuronide-capped PBDs and Thurston’s sequence-specific DNA alkylators and cross-linkers have the potential to be safer molecules. EH: Tie: Brian Mendlesohn – AjiCap & Bioatla’s Bill Boyle. MS: Peter Senter, Seattle Genetics. Peter Senter’s (always entertaining) talk on recent lessons learned, what they tell us about the complexity of ADCs in vivo, and how they can shape future development. CL: John Lambert and Peter Senter played off each other quite well. Their dynamic was fun to watch from the audience given the history and recent progress with both Immunogen and Seattle Genetics. JL: The patient story at the 10th anniversary celebration was very inspiring! (and of course my workshop… haha, just kidding). JS: It looks like the crowd has spoken, and clearly Peter Senter was a hit. His presentation was really good, as would be expected from a true founder of the ADC industry. For me, I agree with Ed on this one, as the concept of CABs is very intriguing as a way to get around off-site toxicity in ADCs. And yes Jens, seeing an actual beneficiary of our efforts was incredibly impactful.

Q #3) Were there any unexpected trends that you noticed this year?
GS: ADCs with PBD payloads have not showed any promising results in the past year and the absence of PBD ADC-related presentations and posters were not surprising. EH: Interesting absence of big biotech/pharma and the equal counter-force of maturing small innovative biotechs. MS: A new wave of investment into ADCs from startup novel technologies to established big biotech/biopharma. CL: Increasing early-stage discussions regarding developability with target knowledge, known tox/clinical data, and site-specific technologies. JL: I was intrigued by the fact that the ADC platform moves from “simple” chemo-payloads to a true versatile platform to couple various agents, incl. immune stimulatory molecules. JS: Did anyone else notice that Ed and Mike are almost completely diametrically opposed on their response to this question? If that doesn’t demonstrate the value of a panel, nothing will. For me, I was surprised by the recognition that Linkers matter in an ADC. For so long they have either been stable or cleavable and that was the end of the story. This year there was much more talk about how they are active participators in internalization and plasma stability.

Q #4) What was the most innovative new idea you came across?
GS:Ajinomoto’s AJICAP technology. The Fc-region targeting peptide was designed using a structure-based approach. The resulting reactive handle is attached a single, native Lys amino acid thereby eliminating the need to engineer the Ab to achieve DAR 2 site-specific ADC. EH: AjiCap MS: There were too many to single out one, but I was pleasantly surprised at the novel ideas at the poster session. CL: The Conditionally Active Biologics (CABs) concept by BioAtla, and also to see how CABs will stack up against ProBodies by CytomX. JS: I am in complete agreement with Mike here. The people participating in the poster session had some really interesting ideas. In particular, I liked the poster about using 2D LC-MS to separate different DAR species and then to clean up the samples prior to MS analysis. Also, the work that Ganapathy is doing with his group at Magenta was very interesting in that they need to make ADCs which are specifically unstable in the plasma for fast clearance, instead of the polar opposite for most other projects.

Q #5) What in your mind is the biggest hurdle that ADCs still need to tackle?
GS: Developing better and more robust models to predict various aspects of PK/PD and ADME considerations is and always has been a challenge. EH: Defeating/decreasing non-specific uptake of ADCs which cause dose-lowering tox. There are several strategies coming to a head. MS: The notion that ADCs have exhausted their utility and are not worth investing compared to the latest technologies (e.g., cell and gene therapy). CL:Overcoming negative public sentiment. ~60% of drug candidates fail in Phase I. JL: We still are way too far from a true magic bullet: we didn’t achieve to widen the Ti as hoped/expected. JS: I think the panel nailed this one. Ganapathy, Ed, and Jens are effectively saying therapeutic window, and Mike and Charley are saying that people are getting tired of waiting for ADCs to be the “magic bullet”. I find both to be true, but I’m also fully expecting the shine of cell and gene therapy to come down a little bit when the reality of their difficulties start setting in.

Q #6) Complete the sentence: One year from today, the ADC landscape will be different because of …
GS: Alternate format ADCs (bispecifics, biparatopics etc.) and the emergence of non-chemotherapeutic payloads such as agonists. EH: Improved tox/potency/TI control via several ideas initiated 3-5 years ago. MS: Multiple new approvals and smashing early-phase success of next-gen technologies. CL: Trastuzumab Deruxtecan (Daiichi Sankyo) and Enfortumab Vedotin (Seattle Genetics). JL: We will see new MoAs coming along and move beyond Oncology. JS: I’m with Mike and Charley here. New approvals is followed by new money, which will fund the next evolution of ADC development that Ganapathy and Ed are talking about.

Alright. And with that, we have completed the World ADC Wrap-up article. Did you make it this far? What did you think? Let me know if you would like more of this kind of article.