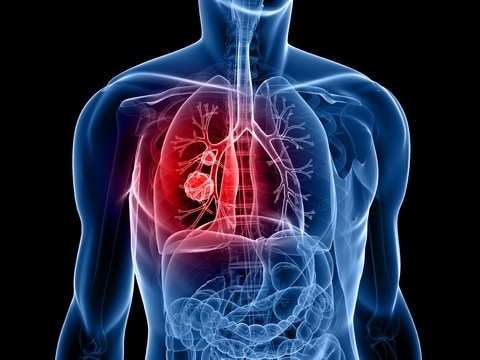 Thrirty-tree percent of patients with small cell lung cancer or SCLC and 31% with non-small cell lung cancer or NSCLC had their tumor reduced in size by 30% or more, after being treated with sacituzumab govitecan (IMMU-132), an investigational antibody-drug conjugate or ADC being developed by Immunomedics Inc, a clinical-stage biopharmaceutical company developing monoclonal antibody- based products for the targeted treatment of cancer.

According to the American Cancer Society, an estimated 221,200 new cases of lung cancer are expected in 2015 in the United States, accounting for about 13% of all cancer diagnoses. The disease accounts for more deaths than any other cancer in both men and women. An estimated 158,040 deaths are expected to occur in 2015, accounting for about 27% of all cancer deaths. Worldwide, the International Agency for Research on Cancer (IARC) estimated a cancer incidence and mortality for lung cancer of 1.825 million new cases and 1.590 million deaths, respectively, in 2012.

Among these cancer, NSCLC is the most common type of lung cancer, accounting for more than 85% of new diagnoses. There are three main subtypes of NSCLC, including adenocarcinoma, squamous cell carcinoma, and large cell carcinoma. Patients with advanced-stage NSCLC are usually treated with chemotherapy, targeted drugs, or some combination of the two. In the current Phase II study with sacituzumab govitecan, tumor shrinkage was observed in both adenocarcinoma and squamous cell carcinoma.

SCLC, which accounts for 13% of new cases, is the more aggressive form. Treatment options for SCLC are more limited, usually involve chemotherapy alone or combined with radiation. The 5- year survival rate for patients with SCLC is 6%, which is lower than that for NSCLC patients (21%).

Encouraging results
The early efficacy trial results shown are encouraging.  Including patients that reported stable disease as their best response, the trial drug controls the progression of the cancer in 75% and 56% of NSCLC and SCLC patients, respectively. These patients had either failed to respond to their last lung cancer therapies or their cancer had returned or progressed.

The trial results were presented at the 15th Annual Targeted Therapies of Lung Cancer Meeting, an invitation-only meeting sponsored by The International Association for the Study of Lung Cancer (IASLC) by Francois Wilhelm, MD, Immunomedics Chief Medical Officer.

Next generation ADC
Sacituzumab govitecan is a next generation ADC designed for targeted therapy of solid cancers. The agent was created by site-specifically conjugating a TROP-2-targeting antibody with a high ratio of a moderately toxic drug, SN-38, using a pH sensitive linker. TROP-2 is a receptor found on many human cancer cells, such as cancers of the breast, cervix, colon and rectum, kidney, liver, lung, ovary, pancreas, and prostate, but with only limited expression in normal human tissues. In an animal model of human pancreatic cancer, the ADC delivered up to 135-times the amount of SN-38 to the tumor than when irinotecan, the parent drug of SN-38, was given.

Relapsed or refractory lung cancer
A total of 44 heavily-pretreated patients with relapsed or refractory lung cancer have been enrolled into this multicenter study. At the time of analysis, 18 patients with SCLC and 16 with NSCLC were evaluated by computed tomography for response and time-to-progression (TTP). Despite the late-stage setting, TTP for most patients was longer with sacituzumab govitecan than the duration of their previous lung cancer therapy.

“Advanced lung cancer is difficult to treat. We are, therefore, very encouraged by these early efficacy results,” commented Cynthia L. Sullivan, President and Chief Executive Officer. “We are going to meet with regulatory authorities to formulate a registration pathway for sacituzumab govitecan first in metastatic triple-negative breast cancer, another disease with unmet needs. Meanwhile, discussions with potential partners for the out-licensing of this valuable asset are continuing,” added Ms. Sullivan.

Sacituzumab govitecan continues to produce acceptable safety profile in heavily-pretreated patients, with neutropenia (24% Grades 3 and 4 combined) as the major toxicity. Diarrhea, the typical side effect of irinotecan treatment, was minimal at 3% Grade 3. More importantly, repeated efficacious doses of the ADC can be given to patients over months without evoking any interfering immune response.