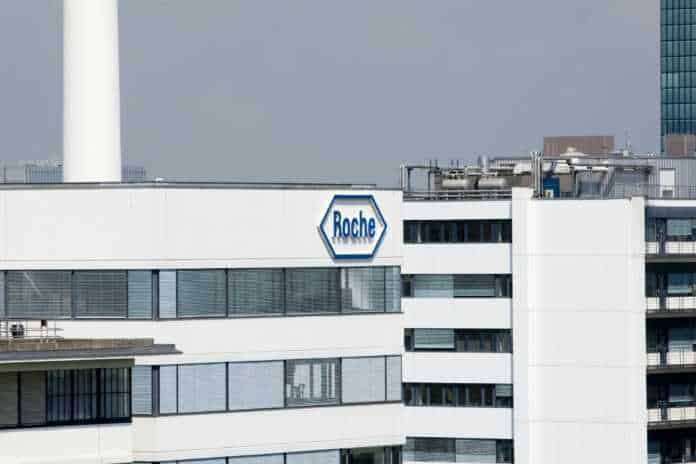 The primary drug in this trial, trastuzumab emtansine is one of three targeted medicines that Genentech/Roche has developed for the treatment of HER2-positive breast cancer. It is a type of medicine called an antibody-drug conjugate or ADC, combining two anti-cancer properties: the HER2-targeting properties of trastuzumab and the cytotoxic chemotherapy agent DM1. In this antibody-drug conjugate, trastuzumab and DM1 are joined together using a ‘stable linker’ to deliver DM1 directly to HER2-positive cancer cells.[2]

Genentech/Roche licenses technology for trastuzumab emtansine under an agreement with ImmunoGen, Inc.

Pertuzumab, the secondary drug in thus trial used in combination with trastuzumab emtansine, is a medicine that targets the HER2 receptor, a protein found on the outside of many normal cells and in high quantities on the outside of cancer cells in HER2-positive cancers. Pertuzumab is designed specifically to prevent the HER2 receptor from pairing (or “dimerizing”) with other HER receptors (EGFR/HER1, HER3 and HER4) on the surface of cells, a process that is believed to play a role in tumor growth and survival. Binding of pertuzumab to HER2 may also signal the body’s immune system to destroy the cancer cells.[3]

Mechanism of action
The mechanisms of action of pertuzumab and trastuzumab are believed to complement each other, as both bind to the HER2 receptor, but to different places. The combination of pertuzumab and trastuzumab is thought to provide a more comprehensive blockade of HER signaling pathways, thus preventing tumor cell growth and survival.[3][4]

Phase III Trial
The Phase III MARIANNE study is an international, randomized, multicenter, three-arm study involving 1,095 people with HER2-positive advanced breast cancer – either with inoperable locally advanced disease that had worsened during or returned after previous treatment, or with disease that had spread to other areas of the body. [1] People with advanced breast cancer at diagnosis and people whose disease had worsened following either neoadjuvant or adjuvant treatment were eligible to participate in this study.

The primary endpoint of the MARIANNE study is progression-free survival or PFS as assessed by an Independent Review Committee or IRC. Secondary endpoints include overall survival, response rate, and the incidence of adverse events. Differences in these endpoints were assessed in each of the trastuzumab emtansine-containing treatment arms compared to trastuzumab plus chemotherapy arm, and also between the two trastuzumab emtansine-containing arms.

Study results
The study showed that the three regimens helped people live without their disease worsening (PFS) for a similar amount of time, meeting its non-inferiority endpoint as assessed by an Independent Review Committee or IRC. However, neither trastuzumab emtansine-containing treatment arm significantly improved progression-free survival or PFS compared to trastuzumab and chemotherapy.  The researchers observed that the adverse events in the two experimental arms of the study were generally consistent with those seen in previous studies of trastuzumab emtansine and/or pertuzumab.

Results do not impact approved uses of trastuzumab emtansine or pertuzumab in advanced HER2-positive breast cancer.

“While we are disappointed by this unexpected outcome, we are pleased that so many patients can benefit from  trastuzumab emtansine with its already approved use and also with the breadth of Roche’s trastuzumab emtansine clinical development program,” commented Daniel Junius, President and Chief Operating Officer of ImmunoGen. “[We have] a number of other trials underway with trastuzumab emtansine, and in 2015 we expects data and – if positive – regulatory submission from its GATSBY study in gastric cancer.”[5]

HER2-positive breast cancer is a particularly aggressive form of the disease that affects approximately 20% of all breast cancer patients. Over the past 15 years, the outlook for people with HER2-positive disease has improved to the extent that those with this form of the disease treated with innovative medicines now typically experience better outcomes than people with less aggressive HER2-negative disease.

Long term development
“Over the past 30 years, we have made significant progress in treating one of the most aggressive forms of advanced breast cancer with medicines that extend patients’ lives across the course of their disease. In this study, we had hoped to show improvement in progression-free survival without the use of traditional chemotherapy in the first line treatment of patients with advanced HER2-positive breast cancer,” noted Sandra Horning, MD, Chief Medical Officer and Head of Global Product Development. “While MARIANNE didn’t achieve this result, we will continue to study these medicines, as well as investigational treatments for other types of breast cancer, with the goal of improving outcomes for patients.”

Data from the Phase III MARIANNE study will be presented at an upcoming medical meeting. Furthermore, GenentechRoche will discuss the data with the appropriate health authorities.

Direct economic impact
According to a report about the disappointing trial results, published by Bloomberg on Friday, shares of Roche (ROG) fell 6.1% to 271.20 francs at 3:35 p.m. in Zurich, Switzerland. This is the steepest intraday drop since April 2009. ImmunoGen Inc. (IMGN) of Waltham, Massachusetts, which makes a component of trastuzumab emtansine and receives royalties on sales of the drug, plunged 47% to $5.70 at 9:47 a.m. in New York, USA.

Analysts at Bloomberg expected that successful trial results of the combination of trastuzumab emtansine and pertuzumab could have helped Genentech/Roche replace sales of trastuzumab the company would lose should that drug face competition from cheaper – biosimilar – copies in coming years. The Bloomberg report further states that trastuzumab was the company’s third-biggest drug in the first nine months of 2014, with revenue of 4.7 billion Swiss francs (US.$ 4.8 billion).