As part of the agreement ImmunoGen will receive $20 million upfront.  The company is also eligible to receive milestone payments for each target, potentially totaling up to $210 million plus royalties on the commercial net sales of any resulting ADC products. Takeda is responsible for the development, manufacturing and marketing of any ADC products resulting from this agreement.

Building agreements
The agreement between ImmunoGen and Takeda adds another collaborative agreement to ImmunoGen’s growing list of partners that already includes Genentech/Roche, Bayer, Amgen, Eli Lilly, and others, confirming the strength of the company’s platform antibody-drug conjugate technology and expertese.

Meaningful improvements
Scientists at ImmunoGen have developed ADC technology to achieve better therapeutic options for people with cancer. “Takeda shares our commitment to developing novel anticancer therapies that meaningfully improve the lives of patients, and we look forward to collaborating with them to create important new ADC product candidates,” noted Daniel Junius, ImmunoGen President and CEO.

“ADC technology is a critically important tool in addressing unmet needs in oncology,” said Christopher Claiborne, Ph.D., Head of the Oncology Drug Discovery Unit at Takeda. “By partnering with ImmunoGen, we are able to leverage this important technology in Takeda’s R&D program and bring novel agents through the clinic.”

The agreement offers proprietary technology created by ImmunoGen enabling the development of an optimal ADC design for a number of cancer targets, including a selection of potent payload agents and engineered linkers.

ADC technology
An ADC consists of a monoclonal antibody that binds to a target found on cancer cells with a cancer-cell killing agent, or “payload,” attached. The antibody serves to target the payload specifically to the cancer cells and the payload serves to kill these cells. In some cases, the antibody also has meaningful anticancer activity.

Cell-killing payload agents developed by ImmunoGen have been developed specifically for delivery to cancer cells using aan antibody as a “targeting vehicle”. These drugs are more potent than traditional chemotherapy agents and can be attached to the “targeting vehicle” via so-called engineered linkers.

ADCs benefit patients because the allow a more precise delivery cancer-killing medication to cancer cells. While the targeted approach enhances the effectiveness of the anticancer drugs, an added benefit is that it also reduce unwanted, and often painful, side effects associated with current chemotherapeutic anticancer therapies, which kill both healthy and unhealthy cells. 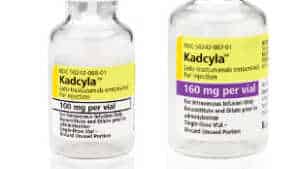 So far, the company’s portfolio of proprietary payload agents includes its tubulin-acting maytansinoids, which are used in over ten ADCs in the clinic today including the marketed product, ado-trastuzumab emtansine (Kadcyla®; Genetech/Roche), which has won FDA approval in 2013.

Cytotoxic Agents
ImmunoGen has created a DNA-acting IGN family of cytotoxic payloads comprising of indolinobenzodiazepine compounds. In preclinical trials these novel – highly potent DNA alkylator/crosslinker – payloads were specific in vitro, even against multidrug resistance (MDR) of cancer cells and cells that express a low antigen number. They have sown to be stable in circulation in vivo while, at the same time, maintaining biological activity in circulation. Furthermore, dose-dependent anti-tumor activity was demonstrated in tumor xenograft models in vivo.

Based on these initial findings, IGN based payloads are expected to further expand the types of cancers potentially addressable with effective ADC therapies.  Among these potential cancers to be treated are those insensitive to tubulin-acting agents or with less-robust target expression. In preclinical trials,

Linker technology
Over the last 5 years, linker technologies have taken on greater importance in the development of ADCs.  While their synthesis is quite complex – requireing a number of aspects to be critically balanced – scientists at ImmunoGen have engineered intracellularly cleavable and non-cleavable linkers are designed to be stable while the antibody-drug conjugate is traveling through the blood stream to the cancer cells and then optimize payload release and antitumor activity.  Their effort has resulted in a number of alternative linker/payload pairings – optimized for antibody-drug conjugate design – which are compatible with both its maytansinoid and indolinobenzodiazepine based IGN platforms.

Financial markets respond
Marketed by Genetech/Roche, ado-trastuzumab emtansine sales contributed $4.6 million in royalty payments during ImmunoGen’s fiscal second-quarter 2015. These royalty payments were directly tied to the prior quarter’s sales of the drug, doubling the amount the company received in the comparable period the year before.

After information about the agreement between the companies became public today, stock of ImmunoGen’s sky-rocketed by 16.8% to US $ 8.69 (+ 1.25 at market closed, NASDAQ: IMGN).