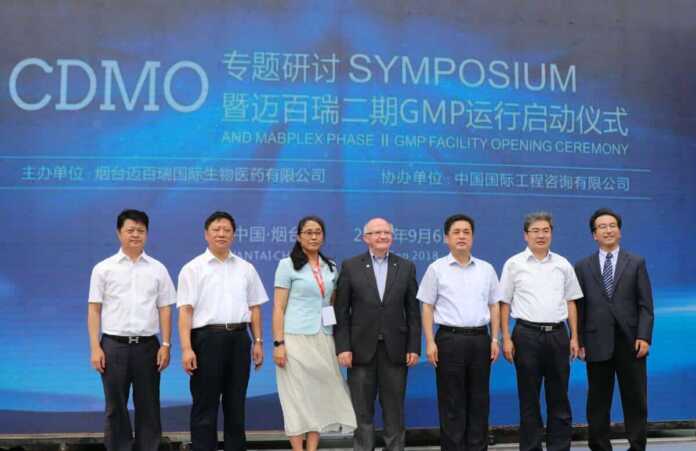 In an announcement made to the international business and financial press, MabPlex International, a global Contract Development and Manufacturing Organization or CDMO based in Yantai, China, confirmed that it had closed a Series A funding round of U.S.$ 59.1 million (RMB Yuan 400 million).

The financing round was backed by multiple global investors lead by China’s State Development & Investment Corporation (SDIC) and Shenzhen Venture Capital based in Shenzhen, Guangdong, China.

International expansion and recognition
China’s population has, over the last decades, aged much faster than similar populations in other countries. * The growth in the number of older people poses challenges to the delivery of healthcare, among which the most common are a surging costs and a rising difficulty in managing these costs as well as the and distribution of care.

Confronted with this aging population* and, in addition, facing significant unmet medical needs in a number of therapeutic areas, including cancer and diabetes, various private and Chinese state-owned investment corporations have, in an attempt to improve care, increased their funding of a number of biotechnology companies.  This growth in venture capital investment funding has also benefited MabPlex.

MabPlex, which offers biologics development and manufacturing services, including monoclonal antibodies (mAbs), recombinant proteins, antibody-drug conjugates and bispecifics, has, since the founding of the company in 2013, rapidly expanded operations.  Today, these operations include two sites in China (Yantai and Shanghai) and one site in the United States (San Diego, CA).

The rapid growth is primarily based on the company’s expertise, from gene sequencing to cell line development and commercial production. MabPlex’s Chinese Hamster Ovary (CHO) cell line, for example, used for the production of recombinant therapeutic proteins, is uniquely designed to move novel drug candidates in the shortest possible time from DNA to finished recombinant protein products.

The company’s expertise and high standards in development and manufacturing, coupled with a state-of-the-art facilities and cGMP quality management, have been recognized by regulators in the United States, Australia and China.  This recognition demonstrates the strength of MabPlex’s global CDMO service, making it valuable partner for biotechnology companies involved in the development of antibody-drug conjugates.

Funding
The receipt of the Series A funding, which represents a significant round of venture capital financing, is expected to support the upgrades to MabPlex’s technology platform, Phase III and commercial production expansion, as well as the company’s international strategy.

Since investors in Series A funding, a critical phase in any company’s growth, are not just looking for great ideas, but are generally looking for companies with ideas, a strong management team and a strategy designed to establish a successful, money-making business, this funding round is yet another recognition confirming the strength of the MabPlex’s management and offerings.

“With our professional services and international standards, R&D companies can not only shorten product development time, but more importantly, they can use limited funds for new drug projects themselves, reduce R&D risks and increase corporate value,” said Jianmin Fang, Ph.D., Chairman and Chief Executive Officer of MabPlex International, Ltd.

“This financing round will greatly enhance our service capabilities, we will continue to provide high quality services to our customers,” Fang concluded.

Expansion
The Series A funding round follows a number of milestones in the past 12 months, including expanding the MabPlex’s manufacturing facility to a total of approximately 750,000 ft²; with 400,000 ft² devoted specifically to cGMP execution, in Yantai, China.

According to reports published by the company, the newly completed facility includes six independent cell culture suites, four independent purification suites, and a cGMP warehouse. Each of the six cell culture suites will support up to two single-use bioreactors at volumes of up to 2,000L (with a maximum capacity of 24,000L).

Following the opening ceremony, which took place on September 6, 2018, MabPlex’s Jianmin Fang said that “… With a growing number of novel and increasingly complex drug constructs in early development pipelines and new targeted therapies, such as ADCs, in late stage development and moving to commercialization, there is a growing global demand for specialized CDMOs.” MabPlex expects to be among these specialized companies.

Fang further explained that MabPlex, with the opening of the new facility, along with process development sites and a state-of-the-art Process Development Center of Excellence in San Diego/La Jolla and Shanghai, is expected to meet the needs of the company’s new and current clients as they progress to commercialization of their novel, investigational, agents.

*According to “China Country Assessment Report on Ageing and Health,” published by the World Health Organization (WHO) in 2015,  the pace of population ageing is much faster in China than many other high-income or low-and middle-income countries. The reports states that in the next 25 years, the percentage of people in China aged 60 years or over is expected to more than double, from 12.4% (168 million people) in 2010 to 28% (402 million) in 2040. In contrast, it took France 115 years, Sweden 85 years and the United States 69 years for the proportion of the population aged over 60 years to double from 7% to 14%.

Brentuximab Vedotin in Combination with Chemotherapy Approved for Adults with Previously...