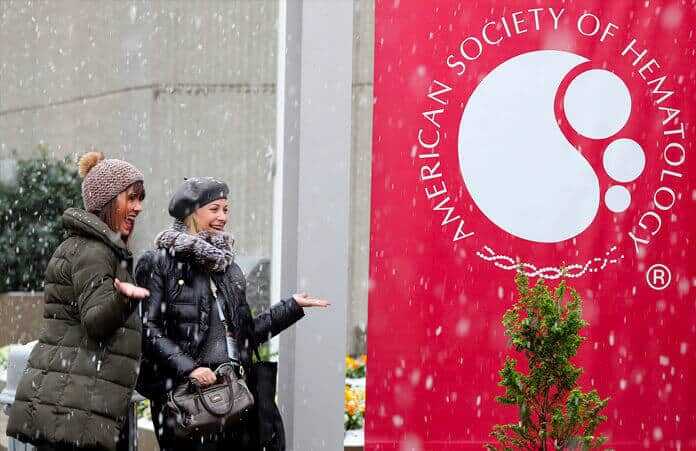 Two studies presented at the annual meeting of the American Society of Hematology (ASH), held December 9 – 12, 2017, showed frequent expression of CD74, a cell-surface protein in hematologic B-cell malignancies, in both heavily-pretreated and never-treated multiple myeloma, abnormal plasma cells that build up in the bone marrow, and in three major types of non-Hodgkin’s lymphoma.

The studies were performed using the unconjugated antibody from STRO-001, a novel antibody-drug conjugate comprised of a human aglycosylated anti-CD74 IgG1 antibody (SP7219) genetically incorporating the non-natural amino acid para-azidomethy-L-phenyalanine (pAMF) to enable the site-specific conjugation of a non-cleavable dibenzocyclooctyne (DBCO)-maytansinoid linker-payload. The investigational agent is being developed by Sutro Biopharma.

There’s a critical need for new, highly-targeted therapy with better tolerability for both multiple myeloma and non-Hodgkin’s lymphoma…

Based on the study results presented this years’ annual meeting, Sutro plans to submit an investigational new drug (IND) application by the end of 2017 and to launch a Phase I clinical trial in the first quarter of 2018 to evaluate the safety and preliminary efficacy of STRO-001 in patients with multiple myeloma and aggressive and indolent, or slow-growing, lymphomas.

Both of the studies presented yesterday used immunohistochemistry to measure CD74 expression by examining the Sutro antibody’s CD74-binding capacity in tissue samples from patients with multiple myeloma and non-Hodgkin’s lymphoma.

Bone marrow
In the first study, presented by Arturo Molina, MD, MS, FACP, a medical oncologist and Sutro’s Chief Medical Officer, the research collaborators, led by Arun Wiita, MD, Ph.D, an assistant professor of pathology and laboratory medicine at the University of California at San Francisco, examined bone marrow samples from multiple myeloma patients and found that the Sutro antibody detected CD74 expression in 35 of the 36 samples, including specimens from patients who were treatment-naïve and patients who had been heavily pre-treated with chemotherapy and stem cell transplantation.

Reducing tumor burden
CD74 expression levels were determined to be similar in samples from both newly-diagnosed as well as relapsed or refractory patients. Two pathologists blinded to the patients’ clinical histories and pathology results independently reviewed the specimens.

Human tissue samples
In the second study, Sutro’s research collaborators, led by Yaso Natkunam, MD, Ph.D, professor of pathology and director of hematopathology at Stanford University School of Medicine, examined human tissue samples of non-Hodgkin’s lymphoma and found that CD74 was highly-expressed in most samples from patients with diffuse large B-cell lymphoma (135 out of 140, or 96%), follicular lymphoma (148/151, 98%) and mantle cell lymphoma (19/21, 91%).

“Based on these findings, we anticipate that STRO-001 will be effective in initial clinical trials with multiple myeloma patients who have received varying levels of treatment, and in non-Hodgkin’s lymphoma patients with both aggressive and indolent, or slow-growing, forms of the disease.”

“Sutro’s XpressCF+TM platform enables us to produce novel ADCs that directly target cancer cells with a homogeneous payload, thus delivering the optimum dose of cytotoxin to the tumor every time,” Molina added.

The XpressCF+™ platform allows the incorporation of non-natural amino acids into specific positions on the generated antibody, allowing for highly efficient and precise site-specific conjugation of cytotoxins with a linker and payload to enable consistent, stable, well-defined homogeneous ADCs with pinpoint placement of STRO-001’s toxic payload and a drug-antibody ratio (DAR) of 2.

By contrast, many earlier, first-generation ADCs have toxic warheads attached at varying positions, resulting in products with unpredictable and sub-optimal pharmacologic properties, stability and efficacy.

Sutro’s technology enables the company to iteratively discover and test molecules in a rapid cycle of weeks rather than months to rapidly identify the optimal molecule designed for safety and potency.

This past October, Sutro received a manufacturing milestone payment from Celgene.

The milestone payment was based on the company’s collaboration with Celgene that was originally established in 2014 and followed the successful scale-up to 1,000-liter cGMP production of XpressCF+TM, a proprietary cell-free protein synthesis technology, at Sutro’s manufacturing facility in San Carlos.