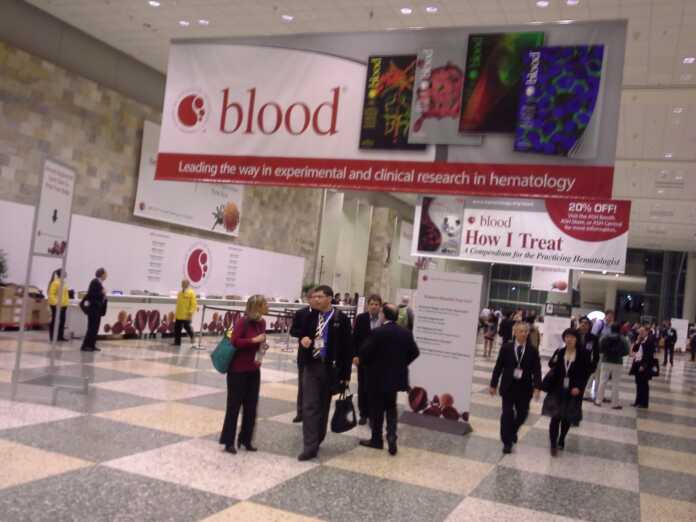 Acute myeloid leukemia (AML), the most common type of acute leukemia in adults which is also known as acute nonlymphocytic leukemia, is a cancer of the blood and bone marrow. In healthy individuals, the bone marrow makes blood stem cells (immature cells). Over time, these blood stem cells become mature blood cells — either myeloid or a lymphoid stem cells.

In acute myeloid leukemia the presence of acquired genetic alterations in hematopoietic progenitor cells found in the bone marrow alter the normal mechanisms of cell growth, proliferation and differentiation, affecting these cells that would normally turn into white blood cells. As a consequence of the disease, myeloid stem cells become a type of immature white blood cell called myeloblasts (or myeloid blasts). Blocking differentiation as well as unchecked proliferation, AML results in the accumulation of myeloblasts at the expense of normal hematopoietic precursors.[1]

If untreated, AML spread to the blood and to other parts of the body including lymph nodes, liver, spleen, brain and spinal cord and testicles, and quickly becomes fatal.

CD33 and acute myeloid leukemia
CD33, a 67-kDa glycoprotein, is expressed on the surface of about 90% myeloid leukemia cells as well as on normal myeloid and monocytic precursors. In AML, elevated levels of CD33 are found in cases having molecular markers associated with poor prognosis, including mutations in FMS-like tyrosine kinase 3 (FLT3). This makes CD33 an attractive target for monoclonal antibody-based therapy of acute myeloid leukemia.

Gemtuzumab ozogamicin (Mylotarg®; Wyeth/Pfizer), an anti-CD33 antibody conjugated to the antitumor antibiotic calicheamicin, improved survival in a subset of AML patients when combined with standard chemotherapy. Safety concerns led to US marketing withdrawal of this drug in 2010. However, as result of the demonstrated activity of gemtuzumab ozogamicin, CD33 remained a viable therapeutic target for AML.

FLT3 mutation
Research has shown that activating mutations in the FMS-like tyrosine kinase 3 (FLT3) gene are recognized one of the most frequently encountered, and clinically challenging, class of mutations in acute myeloid leukemia.[5] The internal tandem duplication mutation (FLT3-ITD), in turn, is the most common FLT3 mutation.

Now, in updated preclinical research, results presented at the 56th annual meeting and exposition of the American Society of Hematology, being held in San Francisco, December 6 – 9, 2014, IMGN779 was found to demonstrate targeted activity against AML cell lines in vitro, with IC50 values ranging from 2-3,000 pM.

Kathleen Whiteman, MS, and a team of researchers at ImmunoGen, and Paul Noordhuis, PhD, and his colleagues from the Department of Hematology, VU University Medical Center, Amsterdam, The Netherlands, evaluated the in vivo activity of IMGN779 against MV4-11 xenografts in SCID mice – which are severely deficient in B and T lymphocytes. At a single dose of 0.6 mg/kg (conjugate dose, 10 µg/kg DGN462 dose), IMGN779 was highly active (T/C = 1 %). The results was complete tumor regressions (CR) in 3/6 animals and partial regressions (PR) in 6/6 animals. [5]

The researchers also looked at DGN462-ADC to a non-relevant target and found that this was inactive (T/C = 95%) at the same dose, suggesting that the activity of IMGN779 was realy due to its CD33 targeting. IMGN779 has previously been shown to be highly active against AML xenograft models without FLT3-ITD mutations, at minimally efficacious doses of 0.6 mg/kg (10 µg/kg DGN462), demonstrating that the presence of FLT3-ITD does not confer resistance to IMGN779 treatment.

Kairos and Zymeworks Bring Together Complementary Technologies for the Development of...