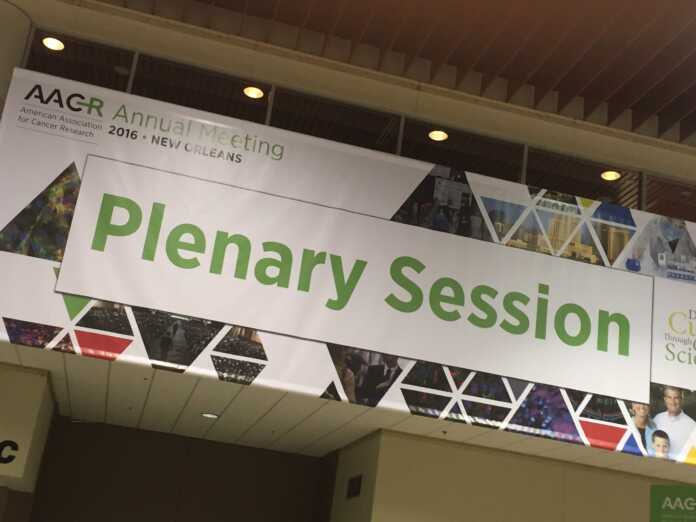 During the annual meeting of the American Association for Cancer Research (AACR) being held  April 16 – 20, 2016 in New Orleans, LA, Celldex Therapeutics presented 3 posters covering new data related to their glembatumumab vedotin research program.  The company also reported on Phase I safety and immune response data from the ongoing study evaluating varlilumab and nivolumab in patients with advanced cancers.

gpNMB has been shown to be associated with the ability of the cancer cell to invade and metastasize and to correlate with reduced time to progression and survival in breast cancer. The gpNMB-targeting antibody, CR011, is linked to a potent cytotoxic, monomethyl auristatin E (MMAE), using Seattle Genetics’ proprietary technology.

Glembatumumab vedotin is designed to be stable in the bloodstream but to release MMAE upon internalization into gpNMB-expressing tumor cells, resulting in a targeted cell-killing effect. The novel antibody-drug conjugate is being developed for the treatment of locally advanced or metastatic breast cancer with an initial focus in triple negative disease (TNBC), stage III and IV melanoma. Independent investigators are also studying glembatumumab vedotin in uveal melanoma and osteosarcoma.

Validation of gpNMB
The presentations during the 2016 AACR included data enhancing the understanding of glembatumumab vedotin’s mechanism of action (MOA) and further validation of the overexpression of its target, gpNMB, in a wide range of tumor types.

Using a validated immunohistochemistry (IHC) assay to detect the expression of gpNMB, investigators examined tissues from multiple types of solid tumors and corresponding normal (non-malignant) tissues. The validated assay for use in clinical trials for patients with a wide range of cancers and found over-expression of gpNMB in samples of tumor tissue versus normal tissue, including squamous cell carcinoma of the lung (85%), osteosarcoma (62%), pancreatic cancer (55%), lung adenocarcinoma (45%) and squamous cell carcinoma of the head and neck (40%). These results suggests that these indications may be appropriate for evaluating the clinical activity of glembatumumab vedotin.[1]

These results support the potential broad applicability of gpNMB as a therapeutic target across a wide range of tumor types.

In addition to TNBC and melanoma, studies have been initiated in osteosarcoma and uveal melanoma.  As part of an ongoing clinical trial program, investigators are also planning a study in squamous-cell carcinoma (SCC) of the lung, a type of non-small-cell lung carcinoma which is closely correlated with a history of tobacco smoking. If early phase clinical trials show a predictive value in these new indications, then the scientist believe that the IHC test can (potentially) be used as a companion diagnostics for further development. [1]

Better understanding of the MOA
A number of collaborating investigators from Celldex, the Washington University School of Medicine, Saint Louis, MO and the University of Alabama Birmingham, Birmingham, AL, used a radio-labeled form of the glembatumumab antibody to study uptake (biodistribution) by tumor cells in vitro and in vivo.  The approach is based on the assumption that using radiolabeled antibodies could be advantageous in stratifying patients who may benefit from glembatumumab vedotin.

To this end, the investigators radiolabeled the naked antibody, Glembatumumab (CR011), with the positron-emitting 89Zr (half life = 3.3 days).  They characterized the stability, affinity, rate of cellular internalization, and specificity of 89Zr-CR011 using various cell-binding assays in human triple-negative breast cancer (TNBC) cell lines.

The investigators found that 89Zr-CR011 is stable in serum solution for up to 5 days, binds specifically to gpNMB+ TNBC cells with high affinity (KD = 16 nM), and internalizes rapidly (50% within 30 – 60 min).

These studies, according to the investigators, will contribute to a better understanding the mechanisms of action for glembatumumab vedotin,  and may provide a diagnostic approach for selecting patients with the greatest likelihood of clinical benefit. [2]

Found on antigen presenting cells, such as dendritic cells, macrophages and B cells, CD40 is a key activator of immune responses and can be modulated using antibodies. In particular, agonist CD40 antibodies are highly effective in preclinical tumor models either through direct interaction with CD40-expressing lymphomas, or indirectly through the activation of an adaptive anti-tumor immune response.

Scientists at Celldex have characterized two fully human antibodies that demonstrated potent agonist activity, such as activating human dendritic cells and B cells and indirectly inducing T cell proliferation. Importantly, Fc receptor interaction, which could cause signal amplification and is required for some CD40 agonist antibodies in development, was not required for agonist ability, enabling controlled, sensitive activation of CD40. Additionally, the drug candidates were shown to upregulate CD95/Fas, a receptor involved in apoptosis, on B cell lymphoma cell lines and to mediate potent anti-tumor activity against the lymphomas in vivo.

“The CD40 pathway has a unique and powerful role in bridging the innate and adaptive immune response, and if properly modulated, it could become a very important part of cancer immunotherapy. We have identified some promising and differentiated antibodies, from which we will select a lead clinical candidate to complement our growing immunotherapy pipeline,” explained Tibor Keler, Ph.D., Executive Vice President and Chief Scientific Officer of Celldex Therapeutics.

“In addition, we are enthusiastic about new research demonstrating gpNMB overexpression in a broad set of tumor types, further reinforcing the wide potential clinical applicability of glembatumumab vedotin,” Keler continued.

ADC Therapeutics and Adagene Enter into a Discovery Collaboration and License...