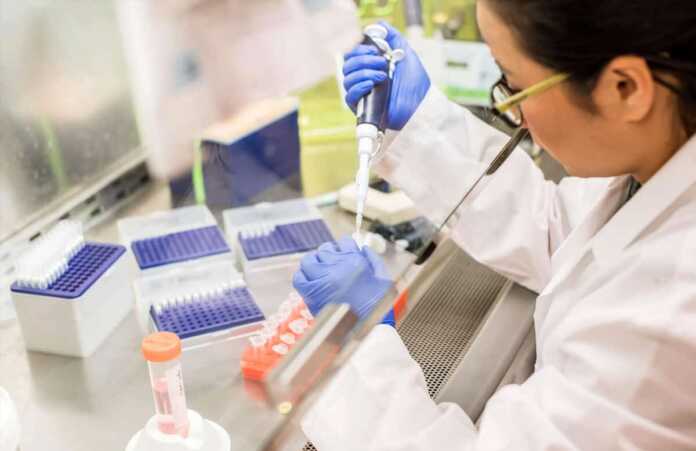 A first patient has been dosed in Phase Ib clinical trial of camidanlumab tesirine, also know ADCT-301, a proprietary antibody-drug conjugate or ADC being developed by ADC Therapeutics, for the treatment of patients with advanced solid tumors.[1]

The Phase Ib clinical trial is designed to evaluate the safety, tolerability, pharmacokinetics and anti-tumor activity of camidanlumab tesirine in patients with selected solid tumors that are locally advanced or metastatic.

Camidanlumab tesirine is an antibody-drug conjugate composed of HuMax®-TAC (licensed from Genmab), conjugated to a pyrrolobenzodiazepine (PBD) dimer toxin.

The HuMax-TAC monoclonal antibody targets the cell-surface antigen CD25 (the alpha chain of the Interleukin-2 receptor or IL2R-α) which is over-expressed on a variety of hematological tumors and shows limited expression on normal tissues.

IL2R-α [*], one of a heterotrimer that makes up the IL2R, has been recognized to play an important role in signal transduction pathways involved in the pathogenesis of autoimmunity and graft rejection. [2] Scientists have also confirmed the preponderance of CD25+ cells in hematological malignancies (malignant lymphomas including B-cell malignancies) [3] and the relationship between increased CD25 expression and poor prognosis [4] raising the possibility of using an anti-CD25 antibody to deliver a cytotoxin to these cells in vivo.

Once bound to a CD25-expresing cell, the investigational agent is internalized into the cell where enzymes release the PBD-based payload. The intra-tumor release of its PBD payload may cause bystander killing of neighboring tumor cells. In addition, the PBD payload will trigger immunogenic cell death, which in turn will strengthen the immune response against tumor cells.

American Society of Hematology
At the 2018 American Society of Hematology (ASH) Annual Meeting, ADC Therapeutics presented interim data on 113 patients dosed in its Phase Ia/Ib clinical trial in lymphoma. In hodgkin lymphoma patients with a median of five prior lines of therapy and no other approved therapy options, the overall response rate was 86.5%, including a 43% complete response rate, at the dose being considered for a pivotal Phase II clinical trial that the Company anticipates initiating in 2019.

“In addition, based on the immune-oncology potential [camidanlumab tesirine] has demonstrated in preclinical studies, we are excited to be starting this clinical trial for ADCT-301 in solid tumors to see if we can make an impact and improve patient outcomes in multiple difficult-to-treat solid tumor cancers,” Feingold added.

“In preclinical models, a single dose of the CD25-targeted ADC induced strong and durable anti-tumor activity against established CD25-negative solid tumors with infiltrating Tregs both as a monotherapy and in combination with a checkpoint inhibitor. Moreover, re-challenged mice did not develop new tumors indicating the CD25-targeted ADC was able to induce tumor-specific protective immunity,” Van Berkel, Ph.D, added.

The identified dose and dosing schedule will be studied in the dose expansion part. Approximately 50 patients will be enrolled in the trial.

[*] The interleukin-2 (IL-2) receptor includes three different IL-2 receptor chains: α, β, and γ. Among these, the α-chain (CD25) on the cell membrane is cleaved by proteolytic processing, and the cleaved α-chain is detected as sIL-2R. The ligand of IL-2R, IL-2, plays a critical role in the development of T and NK lymphocyte as a growth factor.