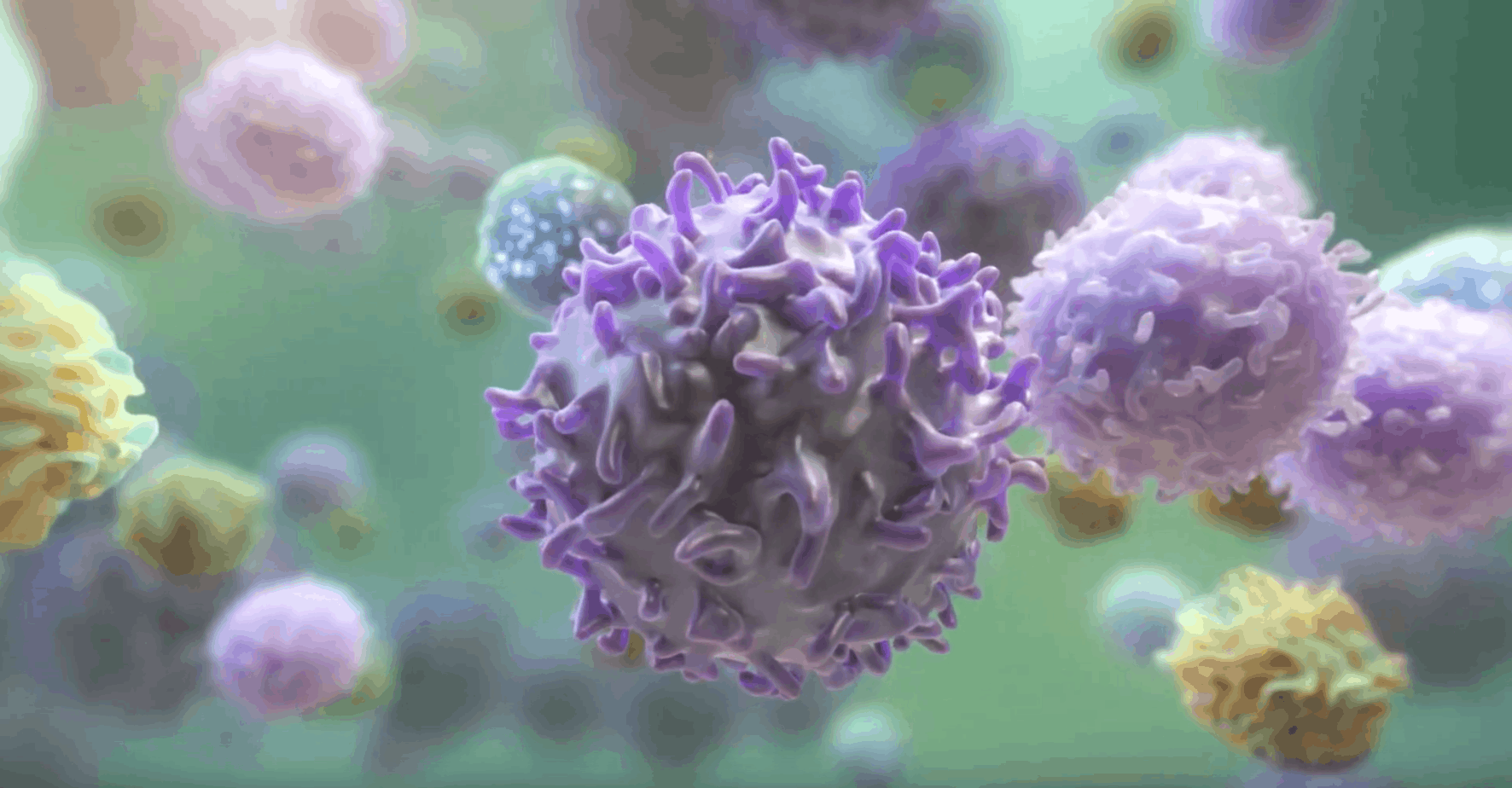 Diffuse large B-cell lymphoma (DLBCL), a form of non-Hodgkin lymphoma, is the most common form of blood cancer. Lymphomas occur when cells of the immune system, known as B lymphocytes, grow and multiply uncontrollably.

DLBCL occurs mostly in adults and is an aggressive lymphoma. The disease can start in the lymph nodes or outside of the lymphatic system in the gastrointestinal tract, testes, thyroid, skin, breast, bone, or brain.[1]

One of the first signs and symptoms of the disease is a generally painless rapid swelling in the neck, armpit, abdomen, or groin. This swelling is caused by enlarged lymph nodes. Some other symptoms may include an increase in night sweats, unexplained fevers, and weight loss.[1][2]

Poor prognosis
DLBCL is associated with a generally poor prognosis. Patients with R/R disease after frontline anthracycline-based chemotherapy have a 3-year event-free survival of ∼30%.1  Even in fit patients with chemosensitive disease to salvage therapy, ∼50% will ultimately progress after autologous hematopoietic cell transplant (AHCT) and experience a median overall survival (OS) of 10 months. [3][4] Those who have disease refractory to primary or salvage chemotherapy or relapse in ≤12 months after AHCT have especially poor outcomes, with an overall response rate (ORR) of 26% to the next line of therapy and median OS of 6.3 months.

Treatment Options
Treatment may differ depending on the location of the tumor and the subtype of lymphoma.[1][3] For patients diagnosed with advanced DCBCL who have not yet been treated previously, a combination of chemotherapy and the monoclonal antibody rituximab (Rituxan®), a treatment combination called R-CHOP (Rituximab + Cyclophosphamide + Doxorubicin Hydrochloride (Hydroxydaunomycin) + Vincristine Sulfate (Oncovin) and Prednisone) [1][2][4].

CAR T-cell therapy
In addition to this treatment option, the FDA approved axicabtagene ciloleucel (Yescarta®; Gilead/Kite) in October 2017.  Axicabtagene ciloleucel is a powerful form of immunotherapy known as chimeric antigen receptor (CAR) T-cell therapy, a type of rapidly emerging immunotherapy approach is called adoptive cell transfer or ACT which involves collecting and using a patients’ own immune cells to treat their cancer. The treatment option has been approved by the United States for the treatment of DCBCL that is not responding to at least two treatment attempts or has returned after being treated before.[4] A stem cell transplant may also be an option if DLBCL returns or relapses.

A new treatment option
This week, the FDA approved Loncastuximab Tesirine (Zynlonta®; ADC Therapoeutics) as the first and only CD19-targeted antibody-drug conjugate (ADC) as a single-agent treatment for adult patients with relapsed or refractory (r/r) diffuse large B-cell lymphoma (DLBCL).  The new treatment option addresses an unmet need across a broad population of third-line (3L)+ r/r patients, including patients with DLBCL not otherwise specified, DLBCL arising from low-grade lymphoma, and high-grade B-cell lymphoma.

The FDA has been granted accelerated approval based on the overall response rate (ORR). However, continued approval for this indication may be contingent upon verification and description of clinical benefit in a confirmatory trial.

“There is a significant unmet need for treatment options for patients with r/r DLBCL, including those who have been heavily pretreated and have difficult-to-treat disease,” said Paolo F. Caimi, MD, University Hospitals Cleveland Medical Center and Case Comprehensive Cancer Center, Case Western Reserve University.

The FDA approval was based on data from LOTIS-2, a large (n=145) Phase 2 multinational, single-arm clinical trial of Loncastuximab Tesirine for the treatment of adult patients with r/r DLBCL following two or more prior lines of systemic therapy. Results from the trial demonstrated an overall response rate (ORR) of 48.3% (70/145 patients), which included a complete response (CR) rate of 24.1% (35/145 patients) and a partial response (PR) rate of 24.1% (35/145 patients). Patients had a median time to response of 1.3 months and the median duration of response (mDoR) for the 70 responders was 10.3 months (inclusive of patients who were censored).

“We extend our deepest gratitude to the patients who participated in our LOTIS-1 and LOTIS-2 clinical trials, their families, the study investigators and our employees, as their commitment made this important milestone possible,” Martin added