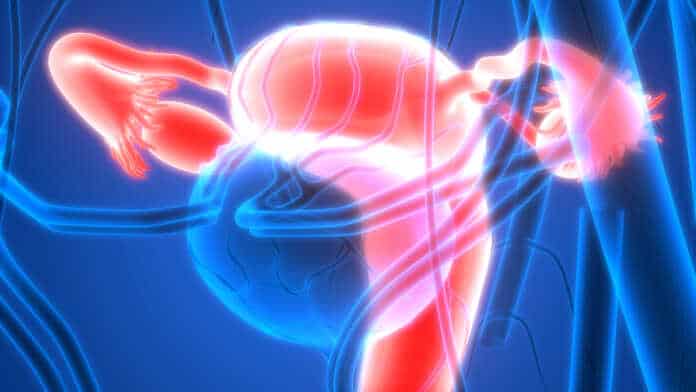 Preclinical data demonstrate the potential for enhancing the activity of mirvetuximab soravtansine, also known as IMGN853, when the investigational agent is combined with and immune checkpoint inhibition.  The drug is being developed by Immunogen. [1]

Data from clinical trials was presented at the 31st Annual Meeting of the Society for Immunotherapy of Cancer (SITC), being held November 9-13, 2016 in National Harbor, Maryland.

Mirvetuximab soravtansine, in which a humanized FRα-binding M9346A antibody is linked to the tubulin-disrupting cytotoxin maytansinoid DM4, is a first-in-class folate receptor alpha (FRα)-targeting antibody-drug conjugate or ADC showing promising single-agent activity and a favorable safety profile in FRα-positive ovarian cancer patients in a phase I study.

The drug is entering a Phase III trial called FORWARD I (NCT02631876) as a single agent treatment for platinum-resistant ovarian cancer.

Ovarian cancer
Ovarian cancer ranks fifth in cancer deaths among women, accounting for more deaths than any other cancer of the female reproductive system. According to the American Cancer Society in 2016 about 22,280 women are expected to receive a new diagnosis of ovarian cancer in the United States, and about 14,240 women will die from the disease.  Ovarian cancer generally develops in older women. About half of the women who are diagnosed with ovarian cancer are 63 years or older. It is more common in white women than African-American women. [2]

The rate at which women are diagnosed with ovarian cancer has been slowly falling over the past 20 years. [2]

Mechanism of Action
Mirvetuximab soravtansine uses a FRα-binding antibody to target the antibody-drug conjugate specifically to FRα-expressing cancer cells and a potent anti-tumor agent, DM4, to kill the targeted cancer cells. After the investigational agents binds to FRα± on cancer cells and is internalized, DM4 is released through enzymatic degradation of the antibody and linker cleavage. This results in disruption of cell division and cell death.

In the poster presentation at SITC, the researchers reported in vitro data showing that treatment of FRα-expressing tumor cells with mirvetuximab soravtansine activates monocytes, a type of antigen presenting cell or APC. [1]

Monocyte activation required both the antibody component of mirvetuximab soravtansine, which interacts with Fcγ receptors on APCs and its cancer-killing agent DM4, which promotes immunogenic cell death of the tumor cells. Activation of APCs in the presence of tumor neo antigen would trigger an anti-tumor T cell response that could be enhanced by immune checkpoint inhibition. Hence, the researchers concluded that their data provided a rationale for the clinical evaluation of mirvetuximab soravtansine and a checkpoint inhibitor.

“We are committed to continuing to drive innovation in the research and development of antibody-drug conjugates for the treatment of cancer. These preclinical data reinforce the potential of combining mirvetuximab soravtansine with an immune checkpoint inhibitor, which we are evaluating as part of our FORWARD II trial,” explained Richard Gregory, Ph.D., executive vice president and chief scientific officer of ImmunoGen.