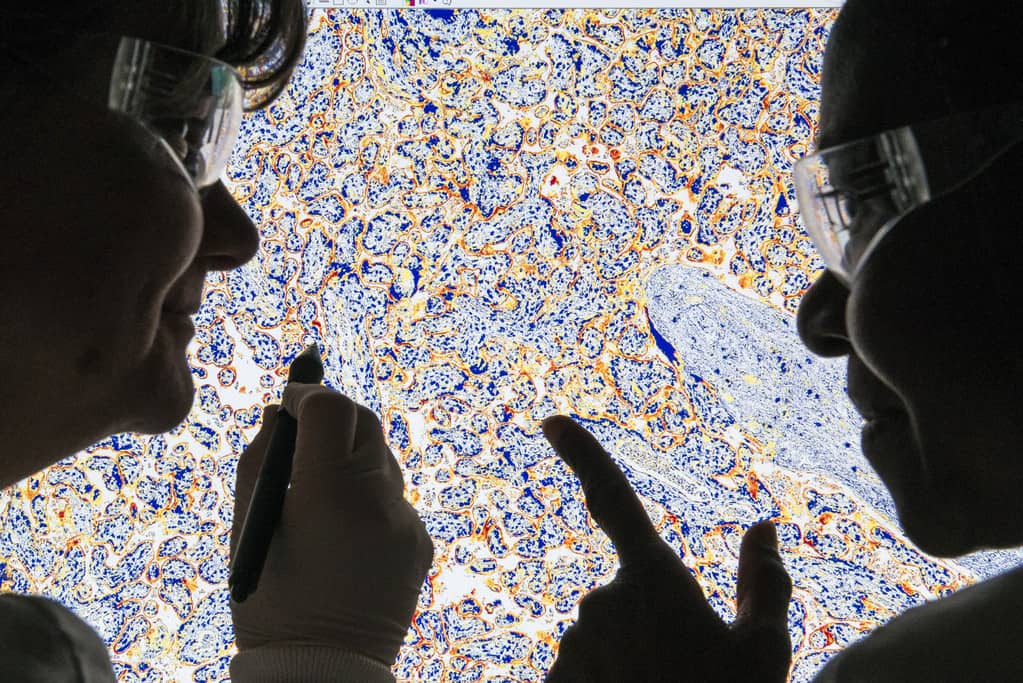 Trastuzumab deruxtecan is currently is approved in the United States and Japan for the treatment of adult patients with unresectable or metastatic HER2 positive breast cancer who received two or more prior anti-HER2-based regimens based on the DESTINY-Breast01 trial. The drug is under accelerated assessment in the EU for a similar potential indication.

Targeting TROP2
Datopotamab deruxtecan (DS-1062), an investigational antibody-drug conjugate, is comprised of a humanized anti-TROP2 monoclonal antibody attached to a topoisomerase I inhibitor payload by a tetrapeptide-based linker with a customized drug-to-antibody ratio (DAR) of four to optimize the benefit-risk ratio for the intended patient population.

Preclinical studies have demonstrated that DS-1062 selectively binds to the TROP2 receptor on the surface of a tumor cell. It is proposed that DS-1062 is then internalized into the cancer cell where lysosomal enzymes break down the tetrapeptide-based linker and release the DXd payload.

“DS-1062, one of our lead DXd ADCs that will form a pillar of our next mid-term business plan, has the potential to become a best-in-class TROP2 ADC in multiple tumors, including lung and breast cancers,” said Sunao Manabe, Representative Director, President, and Chief Executive Officer Daiichi Sankyo.

“This new strategic collaboration with AstraZeneca, a company with extensive experience and significant expertise in the global oncology business, will enable us to deliver DS-1062 to more patients around the world as quickly as possible. As we have done with Trastuzumab deruxtecan, we will jointly design and implement strategies to maximize the value of DS-1062.”

“We see significant potential in this antibody-drug conjugate in lung as well as in breast and other cancers that commonly express TROP2,” said Pascal Soriot, Chief Executive Officer, AstraZeneca.

“We are delighted to enter this new collaboration with Daiichi Sankyo and to build on the successful launch of trastuzumab deruxtecan to further expand our pipeline and leadership in oncology. We now have six potential blockbusters in oncology with more to come in our early and late pipelines,” Soriot concluded.

Financial Terms
AstraZeneca will, as part of this agreement, pay Daiichi Sankyo an upfront payment of U.S. $ 1 billion, of which U.S. $ 350 million is due upon execution, U.S. $ 325 million after 12 months, and U.S. $ 325 million after 24 months. Furthermore, and contingent payments of up to U.S. $ 5 billion include U.S.$ 1 billion for the achievement of future regulatory milestones and U.S. $ 4 billion for sales-related milestones. Total payments under the agreement have the potential to reach up to U.S. $ 6 billion.

The companies have also agreed to equally share in the development and commercialization costs as well as profits from datopotamab deruxtecan (DS-1062) worldwide, except for Japan. Daiichi Sankyo is expected to book sales in U.S., certain countries in Europe, and certain other markets where Daiichi Sankyo has affiliates. AstraZeneca is expected to book sales in other markets worldwide, including China, Australia, Canada, and Russia.

The upfront payment and regulatory milestones will be booked as revenue over the period in which Daiichi Sankyo has contractual performance obligations under this collaboration. Impact on Daiichi Sankyo’s consolidated financials for the fiscal year ending March 31, 2021 will be announced at an appropriate time in the future. The collaboration is expected to enhance the corporate and shareholder value for Daiichi Sankyo over the mid- to long-term.