With a population of 1.4 billion [*] and a rapidly expanding economy, China has become a manufacturing powerhouse. In addition, China is pursuing a goal of becoming a major hub for international bio-pharmaceutical product research, development and manufacturing. In realizing the first steps in this ambitious goal, China has, over the past decade, become a major destination for the global pharmaceutical industry to conduct R&D activities. This growth has drastically changed the pharmaceutical landscape, challenging Chinese companies in raising the quality of their products, while, at the same time, challenging them in expanding their development and manufacturing capacity to serve both global and national markets. [1]

Partly the results of China’s population growth and increasing domestic medical needs, the country has, according to a recent report published by UBM’s CPhI China, become the world’s biggest producer and exporter of active pharmaceutical ingredients or APIs.  Today, the country is responsible for nearly 40% of global API production. But the Chinese pharmaceutical market has still huge opportunities for growth. 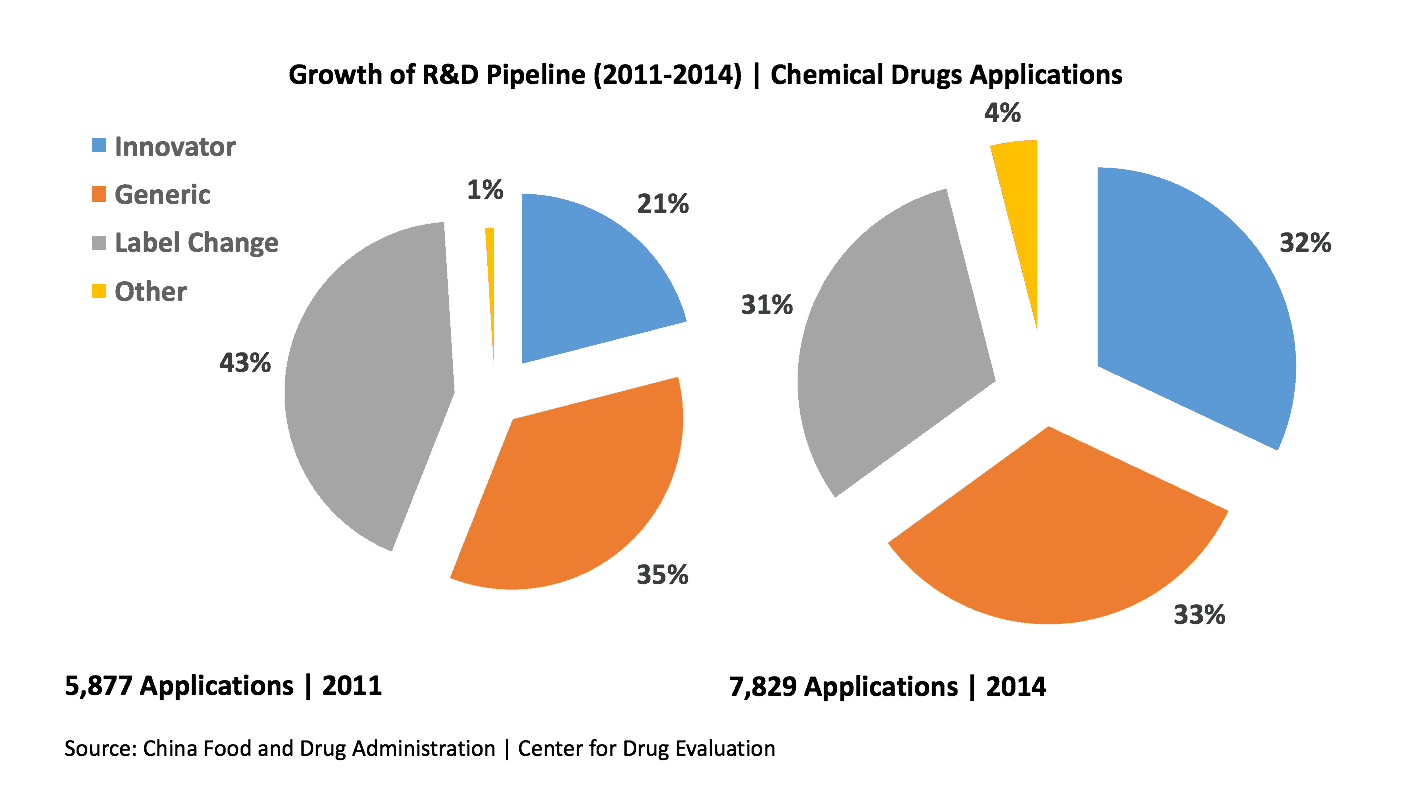 With government’s increasing investment in healthcare and R&D, China offers unique opportunities for innovative products and technologies, and collaboration between global and domestic pharmaceutical companies.

According to the China Food and Drug Administration (CFDA), the government’s significant investment in healthcare led to an increased – and more innovative – R&D pipeline and a growing importance of China as center of bio-pharmaceutical development and manufacturing.  The government’s investment has also cultivated companies with capabilities that are comparable – and competitive – with North American and European R&D, putting high-cost, global-centric R&D models at a real disadvantage.

Eliminating Concern
The growth of China’s bio-pharmaceutical industry is also the result of effectively securing Intellectual Property (IP) rights.  IP rights are among the most valuable resources for pharmaceutical and biotech companies, and their  protection often dictates the future success of the companies involved. While poor IP protection and enforcement have often been cited as limiting factors in the growth of pharmaceutical companies’ drive to carry out R&D in China, recently revised patent laws have increased overall global trust and are expected to effectively deter copycat drug makers.  And while, according to the US-China Business Council, some concern remains, China’s IP laws and regulations increasingly reflect international standards, allowing Chinese authorities to better protect and enforce IP rights.[2]

According to a study about the business of life sciences, pharmaceuticals and healthcare sector in China, published by Deloitte China Life Sciences and Health Care in Shanghai, the increased IP protection and enforcement has resulted in a growing number of global pharmaceutical companies being increasingly attracted to the idea of having a R&D center in China or, alternatively, partnering with Chinese partners.[3]

Furthermore, a general low cost base, a large pool of highly qualified research subjects, increasing scientific capabilities, the local industry’s knowledge, a general lack of regulatory and cultural impediments often found in other countries and insight into the country’s growing drug markets have made China an attractive country for R&D.

Ambitious Plans
In China, regulatory approval for pharmaceutical agents is based on clinical trials that have been carried out in the country. This requirement has also contributed to the global pharmaceutical industry’s interest in conducting clinical trials in China – and, as a result, work with a Chinese contract research organization (CRO) and contract (development) and manufacturing organizations (C(D)MO).

The regulatory environment has, no doubt, boosted China’s ambitions plans to be a primary market for CROs and CDMOs. Most of the top 20 multinational pharmaceutical companies have been expanding their footprint in China by setting up R&D facilities through various enterprise structures. Large companies including Bristol-Myers Squibb (BMS), Pfizer, Roche, GlaxoSmithKline (GSK), Johnson & Johnson and Novo Nordisk continue to develop partnerships with Chinese companies.

Moreover, global pharmaceutical companies are starting to conduct R&D activity specifically related to Asian markets. The specificity is linked to the environmental, cultural and genetic factors, liver disease, certain cancers, and some communicable diseases that are more common in Asian countries, such as China and Thailand than in other countries around the world.

Expanding facilities
Among the growing CRO/CDMOs in China is MabPlex International. Based in Yantai, a port city in Shandong province, China, and founded in 2013, the company specializes in the development and GMP manufacturing of recombinant proteins, antibody therapeutics and antibody-drug conjugates for its global customers. To accommodate growing demand, MabPlex, in October 2016,  broke ground on the expansion of its bio-manufacturing facilities.

The construction of company’s new 428,000 sq. ft. facility is expected to be completed by August of 2017, with utility and HVAC validation finished by December 2017.  The fill/finish facility will be completely validated by March of 2018.

Earlier this year we interviewed Andrew C. Huang, MabPlex’ Senior Vice President of R&D. Huang has developed a robust and proprietary technology platform for the manufacturing antibody-drug conjugates based on covalent thiol conjugation Technology. The resulting Hertuzumab Vedotin, the first ADC being developed in China, has entered Phase I and Phase II clinical trials.

Prior to joining MabPlex International, Huang served for more than 17 years as a biomedical researcher at the University of California, Los Angeles (UCLA), a public research university in the Westwood district of Los Angeles, engaging in molecular medicine, including brain aging, diabetes, stem cells and protein folding research. He has published near 100 research articles, journal reviews and book chapters. During our interview we asked him about his company, the role his company plays in global bio-pharmaceutical development and manufacturing, the current expansion, the potential for antibody-drug conjugates and the regulatory env

Question/Peter Hofland: What excites you the most about the potential of ADCs?

Answer/Andrew Huang: Antibody drug conjugates are one form of combinatorial therapy that uses tumor-targeting antibodies and high-potency chemical drugs. Most antibodies alone have limited efficacy against malignant cancers. The efficacy of an antibody often increases synergistically when conjugated to a high-potency chemical drug. In addition to the enhancement efficacy, the ADC platform can rescue some  cytotoxic drugs, which are too toxic or have poor bioavailability on their own.

PH: What are your company’s major accomplishments over the past 12 months?

AH: We have completed several ADC projects, including providing ADCs for phase II clinical trials and one successful IND with better than expected results.

PH: … and what are your expectations for the next 12 months?

AH: Our ADC projects from US-based clients gradually increased over the last 12 months. And we expect that this will continue in the foreseeable future. That’s why we are expanding our ADC manufacturing capacity to accommodate [the doubling of the number of ADC projects].

PH: As a CDMO, what are the top three things that sets your company’s next-generation ADC platform apart?

AH: I think that there are three things that set us apart. The first thing includes our cysteine conjugate platform and our product quality in terms of conjugation efficiency and fraction of DAR4. The second differentiator is our proprietary thiol covalent conjugation technology and finally, our faster speed and efficiency of completing client’s task as compared to (other) leaders in the field.

Pharma/Industry Questions
PH: MabPlex International is based in China. How big is the role of Chinese CDMOs in the world?

AH: The Chinese are gradually increasing their role as a worldwide CDMO family. However, right now, Chinese CDMO companies are limited in capacity because most Chinese companies focus mainly on Chinese business and they are not familiar with rules and business outside China. But that’s changing. Currently, more and more Chinese companies are starting (representative) offices in the United States and Europe to explore opportunities.

AH: Most CDMO companies in China are led by US/Europe “returnees” so most approaches are likely to be the same or (very) similar. The significant difference will be to fit Chinese “culture” and how to bridge the Eastern culture to Western one.

Regulatory landscape
PH: The unique properties of ADCs create technical challenges that require careful CMC considerations. Based on your experience in the development of ADCs what are some of the current regulatory challenges (with special focus on CMC)?

AH: A few years ago, during the Cambridge Healthtech Institute’s inaugural CMC Strategies for Antibody-Drug Conjugates meeting in Boston, Massachusetts, someone answered the same question by saying that antibody-drug conjugates are conceptually, very simple, but in practice, extremely complicated.  And I must agree with that. In it’s ‘simple’ complexity ADCs combine a monoclonal antibody, a chemical linker and a cytotoxic drug. Simply stated, as a result of the complex nature of an ADC, we need triple the amount of control and characterization to achieve the right formulation, stability and consistency for effective scale up and manufacturing if we want to meet the regulatory requirements.

And with the increased number of ADCs coming down the pipeline, it becomes imperative for pharmaceutical and biotechnology companies to consider the manufacturability of the ADCs. This means that they have to incorporate process design and CMC strategies early on in the development stage of an ADC.

PH: Overall…What do you see is the biggest challenge in the development of ADCs?

But manufacturing ADCs not only involves technical challenges but also challenges in the areas of externalization of manufacturing, supply chain management and new technology considerations. That’s why regulators, looking at the highly toxic nature of ADC payloads, as well as the monoclonal antibody and linker chemistry thta make up an ADC, are concerned about the safety, potency and stability of the product and the workers involved in manufacturing it.

AH: A few years ago, regulations in China for CDMOs were significantly different when compared to Western regulations. At that time the drug license and MFG (Drug Manufacturing) license had to be the same. This greatly limited Chinese CDMO development. However, after November 2015, China adopted a new policy for Marketing Authorization Holders (MAH). This new policy is similar to policies in the United States and Europe: the licenses for marketing authorization and manufacturing are separate.

PH: How has the creation of the China Food and Drug Administration (CFDA) and a restructuring of its regulatory system benefited Chinese CDMOs and in particular, your company?

AH: As mentioned, starting in November 2015, China enforced a new policy for Marketing Authorization Holders similar to policies in the United States and Europe. Prior to 2015, all bio-pharmaceutical companies were required by the China Food and Drug Administration (SFDA) to complete the biologic drug CMC and formulation-fill-finish by themselves. Only a chemical drug could be outsourced or contracted out to CRO/CDMOs. Now, biologics, like any chemical drugs, can be outsourced to CRO-CDMO, like MabPlex.  This includes  R&D and CMC, formulation, fill-finish and even IND submissions.

PH: One often heard concern from companies in North America and Europe is that despite vast improvements, concerns still persist about enforcement of intellectual property (IP) and patent laws in China. How does that impact CDMO business in China?

AH: These concerns have a deep impact on CDMO’s in China. We believe the only thing we can do is to continuously improve our IP enforcement, which is already at Western standards. In addition to our secure enforcement of IP protection, MabPlex has a morning meeting each day to emphasize to all our employees three things: IP, GMP and Safety!

PH: … and how does this, specifically, impact your business?

AH: Companies, especially North American and European companies, are still a little hesitant in dealing with new companies like us. However, we see more and more companies from the United States starting ADC business with us. We are confident that we will prove to our US and European colleagues that we are a trustful and reliable partner.

AH: We already established a branch (MabPlex Inc. USA) in USA last year. But our US branch will not include manufacturing.