A novel anticancer therapeutic called coltuximab ravtansine (CoR; SAR3419; Sanofi) shows favorable results in the Phase II STARLYTE trial in diffuse large B-cell lymphoma (DLBCL). SAR3419 is a humanized CD19 mAb linked to  DM4, a maytansine analog, developed by ImmunoGen. The study results were reported in an oral abstract session at the annual meeting of the American Society of Clinical Oncology (ASCO) being held May 30 – June 3, 2014 in Chicago, IL. The results were also selected for Best of ASCO (abstract #8506).[1][2]

In the data presented , study investigators reported achievement of proof of concept, with 43.9% objective response rate or ORR for the per protocol population (patients with relapsed or relapsed/refractory disease). The primary objective of the study was to assess whether single agent SAR3419 could achieve an ORR of at least 20% in this patient population using Cheson 2007 criteria. Additionally, objective responses were reported among the patients enrolled with primary refractory disease or cancer that had not responded to first-line treatment – with a 21.4% ORR.

Promising activity
“SAR3419 demonstrated promising activity against previously treated DLBCL, including disease that had not responded to first-line treatment,” commented Daniel M. Junius, president and CEO of ImmunoGen. “We believe the unique profile of SAR3419 can make an important difference for patients with DLBCL, and potentially for other types of B-cell malignancies. These data also add to the growing body of favorable findings with ADCs using our technology.”

The STARLYTE trial is evaluating the efficacy and safety of SAR3419 used as a single agent to treat relapsed or relapsed/refractory CD19-positive DLBCL. Patients received SAR3419 at 55 mg/m2 weekly for four weeks and then every other week until disease progression or discontinuation. Of the patients enrolled in the trial, 55 were evaluable for efficacy and 61 were evaluable for safety.

The study investigators reported that SAR3419 was found to have a favorable safety profile, with few treatment-related grade 3/4 adverse events  or AEs or serious AEs reported. No grade 3 or 4 peripheral neuropathy or ocular events were observed; any ocular events were low grade (1 or 2), manageable and reversible. Moderate hematological toxicities were reported including anemia, thrombocytopenia and neutropenia. 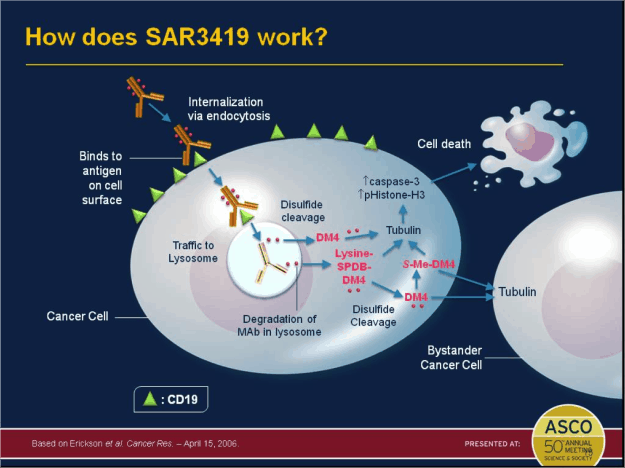 SAR3419 in combination with rituximab
Unrelated Phase II study findings, presented at the annual meeting of the American Society of Hematology (ASH) being held in New Orleans, LA, December 7 – 10, 2013 assessing the activity and safety of SAR3419 in combination with rituximab (Rituxan®; Genentech/Biogen Idec) to treat DLBCL that had previously been treated with standard therapies including rituximab, was found to be generally well tolerated.

Patients with CD19-positive and CD20-positive DLBCL relapsing or refractory disease (defined as unresponsive to or progressing within 6 months of regimen completion) after at least one standard treatment — including rituximab — and who are not a candidate for or who already underwent transplant were eligible for enrollment in this Phase II trial.

Patients received a total of eight doses of CD19-targeting SAR3419 (at 55 mg/m2) and of CD20-targeting Rituxan (at 375 mg/m2), with the drugs administered weekly for four weeks and then every other week over eight weeks.

In this study a total of 52 patients received SAR3419 and rituximab.  Forty five (45) patients were evaluable for efficacy (the per protocol population). Nearly three in four (73%) patients enrolled had Stage III/IV disease. Sixty percent (60%) had primary refractory disease and another 16% were refractory to their last treatment regimen; the rest were relapsed but not known to be refractory. Forty percent (40%) of the study patients had been treated with three or more prior therapies.

In addition to being well tolerated, the combination did not result in patients discontinuing therapy due to treatment emergent adverse events (TEAEs). The most common TEAEs, of any grade, were asthenia, nausea, cough, diarrhea, and weight decrease. Any ocular events were low grade (1/2), manageable and reversible.

Commenting on the results of this trial, John Lambert, PhD, EVP and Chief Scientific Officer noted “These data provide additional support for the efficacy and tolerability of SAR3419, and of our ADC technology,” commented. The combination of SAR3419 and rituximab was found to be well tolerated and to demonstrate activity in patients previously treated with rituximab, even patients with primary refractory disease.”

In the War Against Brain Cancer, Accelerated Clinical Trials Are a...