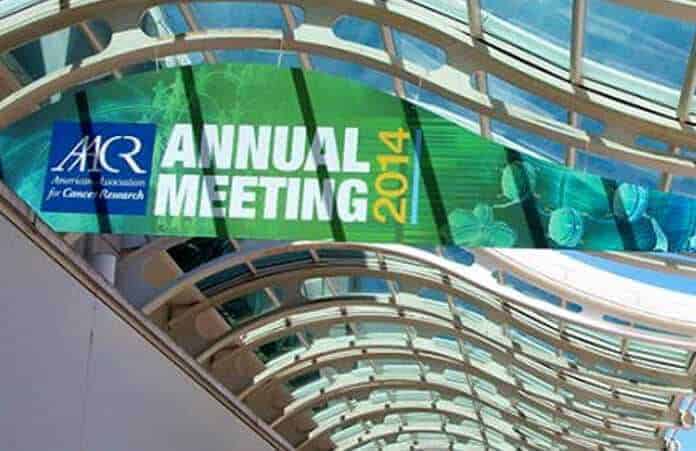 Data presented at the annual meeting of the American Association for Cancer Research (AACR) being held in San Diego, CA. shows clinical activity with IMGN853 (ImmunoGen), an antibody drug conjugate or ADC currently in Phase I clinical testing for the treatment of folate receptor α (FRα)-positive cancers, including ovarian, endometrial, lung and other cancers, starting at doses of 3.3 mg/kg. The findings also show that the dose-limiting toxicity is the reversible ocular side effects (blurred vision and keratitis). These side effects occurred at IMGN853 doses of 5 mg/kg and above, with dose based on patient Total Body Weight or TBW.

IMGN853 is an immunoconjugate or antibody-drug conjugates (ADC) being developed by ImmunoGen, Inc., consisting of the humanized monoclonal antibody M9346A against a FRα-targeting antibody (folate receptor 1 or FOLR1) conjugated, via the disulfide-containing cleavable linker sulfo-SPDB, to the potent microtubule-targeted cytotoxic maytansinoid DM4 that inhibit proliferation of cells at mitosis. The anti-FOLR1 monoclonal antibody moiety of IMGN853 targets and binds to the cell surface antigen FOLR1. After antibody-antigen interaction and internalization, the immunoconjugate releases DM4, which binds to tubulin and disrupts microtubule assembly/disassembly dynamics, thereby inhibiting cell division and cell growth of FOLR1-expressing tumor cells. FOLR1, a member of the folate receptor family is over-expressed on a variety of epithelial-derived cancer cells. The sulfo-SPDB linker prevents cleavage in the bloodstream and may improve this drug’s efficacy in multidrug resistant tumor cells.

Modeling research conducted by ImmunoGen predicted that dosing IMGN853 using adjusted ideal body weight or ADJ rather than TBW should reduce the variability among patients in the concentration of IMGN853 in their blood, as ADJ would better match the dose administered to patient blood volume. The researchers believe that reducing this variability should enable IMGN853 to be well tolerated in more patients at dose levels greater than 3.3 mg/kg. Based on these insights, dosing in the ongoing IMGN853 Phase 1 trial was changed to ADJ several months ago, and the first findings were reported at the AACR meeting today.

“ImmunoGen is committed to successfully developing novel drugs that make a difference for people with cancer,” noted Charles Morris, M.B., Ch.B., M.R.C.P., ImmunoGen Executive Vice President and Chief Development Officer. “Key to drug development is establishing the dosing strategy that provides the greatest efficacy with the least toxicity for each compound, and we believe the findings reported today reflect a strong path forward for IMGN853. We look forward to sharing additional IMGN853 clinical data in the months ahead.”

Modified weekly schedule
The researchers also identified that dosing IMGN853 with a modified weekly schedule – weekly for three weeks every four weeks – should maximize tumor exposure to the compound while keeping IMGN853 blood levels in well-tolerated ranges. This dosing schedule, also using ADJ, has been added to the IMGN853 Phase I trial, but patient enrollment started too recently for findings to be available for presentation at the AACR meeting.[1][2][3]

Maximum tolerated dose
Research is ongoing to establishing the maximum tolerated dose (MTD) of IMGN853 when administered once every three weeks using ADJ. Once this MTD is established, IMGN853 will be evaluated at that dose specifically in patients with platinum-resistant ovarian cancer and in patients with relapsed endometrial cancer. Researchers are  now also establishing its MTD with the modified weekly schedule.