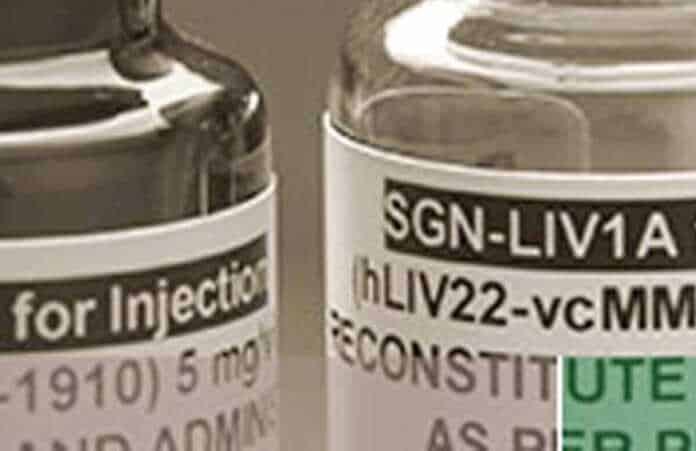 A new phase I clinical trial was initiated late October 2013 to evaluate SGN-LIV1A in patients with LIV-1-positive metastatic breast cancer. SGN-LIV1A is based on Seattle Genetics’ antibody-drug conjugate (ADC) technology. The trial is designed to assess the safety and antitumor activity of SGN-LIV1A, an ADC targeted to zinc transporter LIV-1 (SLC39A6 or ZIP6), an estrogen regulated protein which is expressed in most subtypes of metastatic breast cancer.*  [1][2]

Treatment of cancer is changing with the introduction of more targeted agents and understanding disease-specific prognostic factors. Antibody-drug conjugates are an example of this evolving landscape…

SGN-LIV1A is an antibody-drug conjugate comprised of an anti-LIV-1 monoclonal antibody linked to a synthetic cytotoxic cell-killing agent, monomethyl auristatin E (MMAE). The trial drug is designed to be stable in the bloodstream, and to release its cytotoxic agent upon internalization into LIV-1-expressing tumor cells, which is expressed in most subtypes of metastatic breast cancer. This approach is intended to spare non-targeted cells and thus reduce many of the toxic effects of traditional chemotherapy while enhancing the anti-tumor activity.

“Antibody-drug Conjugates represent a novel treatment approach that have demonstrated activity in both hematologic and solid tumors. SGN-LIV1A is one of four ADCs that we are advancing into the clinic during 2013, demonstrating our significant investment in this approach for the treatment of cancer,” noted Jonathan Drachman, MD, Chief Medical Officer and Executive Vice President, Research and Development, at Seattle Genetics. “The target expression in breast cancer, preclinical antitumor activity, and need for novel therapeutic options for advanced breast cancer patients all support the clinical evaluation of SGN-LIV1A,” he explained.

Targeting ability
ADCs are designed to harness the targeting ability of antibodies to deliver cell-killing agents directly to cancer cells. This approach is intended to spare non-targeted cells and thus reduce many of the toxic effects of traditional chemotherapy while enhancing anti-tumor activity.

“The treatment of cancer is changing with the introduction of more targeted agents and understanding disease-specific prognostic factors. Antibody-drug conjugates are an example of this evolving landscape, representing a rational approach to targeted drug delivery,” said Howard A. Burris, M.D., Chief Medical Officer, Executive Director of Drug Development at Sarah Cannon Research Institute and investigator for this phase I clinical trial. “We are eager to evaluate SGN-LIV1A in this phase I trial for advanced breast cancer.”

Preclinical data
At the annual meeting of the American Association of Cancer Research in April 2013, preclinical data demonstrated that up to 92% of breast tumors analyzed expressed LIV-1, with limited expression in normal tissue. SGN-LIV1A demonstrated significant anti-tumor activity in multiple preclinical models at well-tolerated doses. The preclinical in vitro data for SGN-LIV1A demonstrated target specific internalization and cytotoxic activity against a breast cancer cell line while in vivo studies demonstrated anti-tumor activity in preclinical xenograft models with significant delay of tumor growth compared to control groups. These findings support further evaluation and development of SGN-LIVA as a therapeutic for the treatment of metastatic breast cancer. [3]

* LIV-1 is and present in increased amounts in estrogen receptor-positive breast cancer as well as in tumors that spread to the lymph nodes.