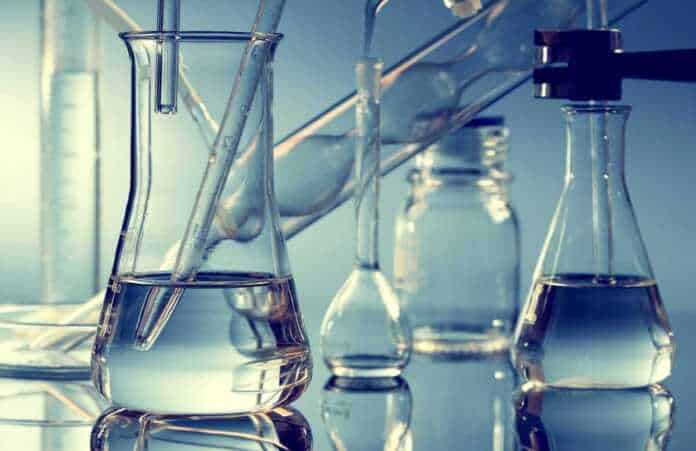 Antibody-drug conjugates (ADCs) are an emerging class of highly targeted cancer therapies in which a monoclonal antibody is chemically conjugated to a cytotoxic drug (payload). These complex biochemical moieties are comprised of three essential components: the monoclonal antibody, the payload, and the linker, which holds the moiety together. Upon targeted recognition of the specific cancer cell receptors, the antibody becomes internalized by the cell, which makes it an effective vehicle for therapy. Once the ADC has been internalized, the cytotoxic drug is released, enabling it to kill the cancerous cell. Common mechanisms of action for these drugs include microtubule inhibition and DNA damage.

Due to the toxic nature of ADC compounds, non-toxic linker payloads (“mimics”) have been designed in order to study and effectively model ADCs. ADC mimics are comparable in the basic structure to the actual cytotoxic ADC, and can be conjugated, purified, and filtered just as normal, cytotoxic ADCs would. 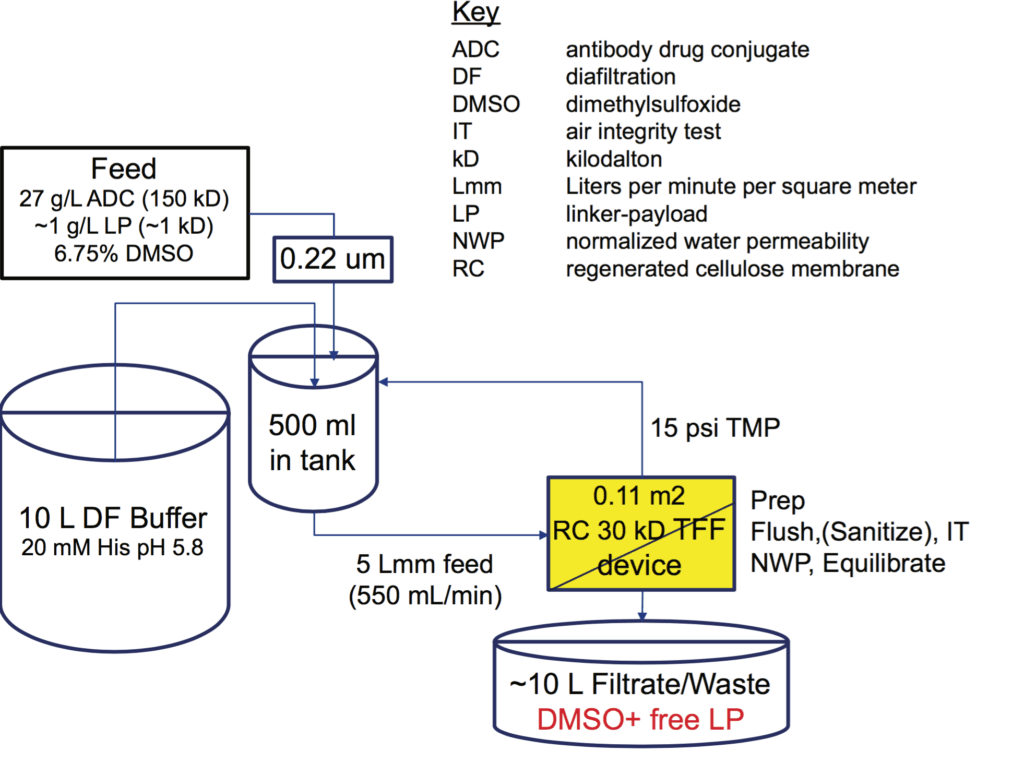 These conjugation reactions require organic solvents and excess equivalents of linker payload (either cytotoxic or mimic). Solvent and excess free drug or mimic are much smaller molecules than the conjugate and can be removed rapidly from the drug substance by diafiltration with tangential flow filtration (TFF).

The TFF step presents a safety concern to operators due to the high toxicity of the payload and the open cassette format of traditional TFF devices. TFF cassettes only seal when installed in a compression holder, thus leaving a risk of operator exposure to process fluid after filter removal for storage or disposal.

A new TFF device format in development comprises a self-enclosed, pre-sterilized capsule that does not require a holder, thus dramatically improving the ease of use and safety of the TFF operation. The new device also provides high efficiency comparable to TFF cassettes, allowing for use of similar pumps and membrane areas. This simplifies conversion between the two formats for process development and production. 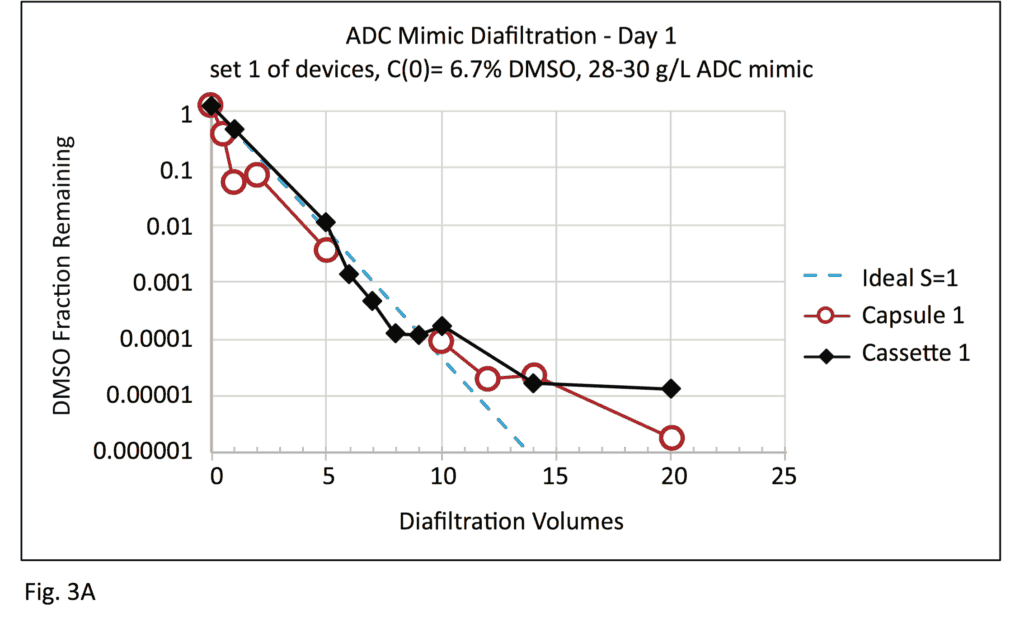 A proprietary, purified monoclonal antibody (~150 kD) was chemically conjugated to a proprietary linker-payload mimic molecule (~1 kD) to make an ADC mimic, and this mimic was used to compare the prototype TFF capsule to state of the art benchmark cassettes. Dimethyl sulfoxide (DMSO) clearance, ADC yield, aggregate level, and flux were analyzed in order to understand the comparability between these two TFF devices. Safety and efficiency of the two devices were also evaluated. 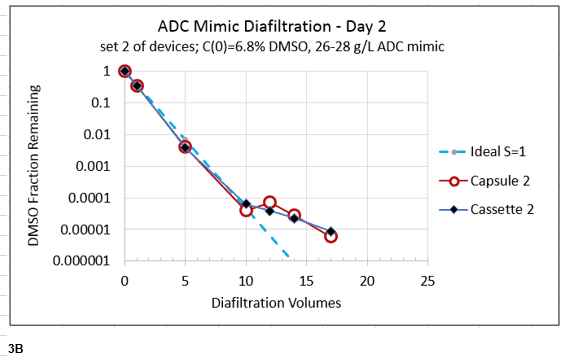 Comparability Data
Key device and system characteristics are shown in Table 1. All values are determined to be within the acceptable range except the hold-up for the cassette system on Day 1, which appears to be in error since tubing was retained for Day 2, where system values are much lower. System hold-up volume was determined by 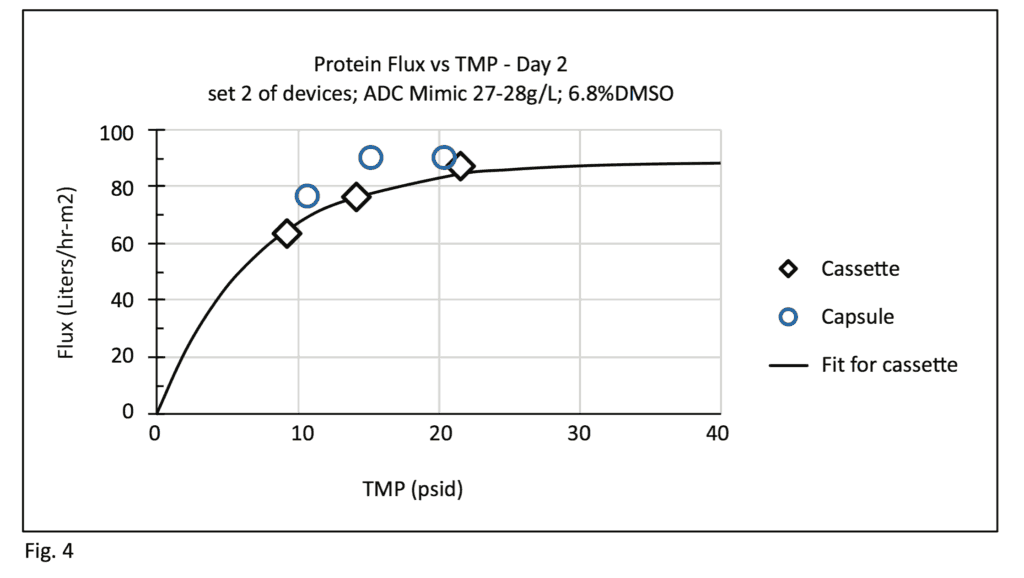 the change in the fully retained protein concentration upon addition of the known stock solution.

It is likely there was an error in pulling the diluted concentration sample from the system or in the UV measurement; therefore, the cassette hold-up value for Day 1 was omitted from the average (Table 1).

DMSO was efficiently cleared from the ADC mimic feed solution by both devices (Figure 3). 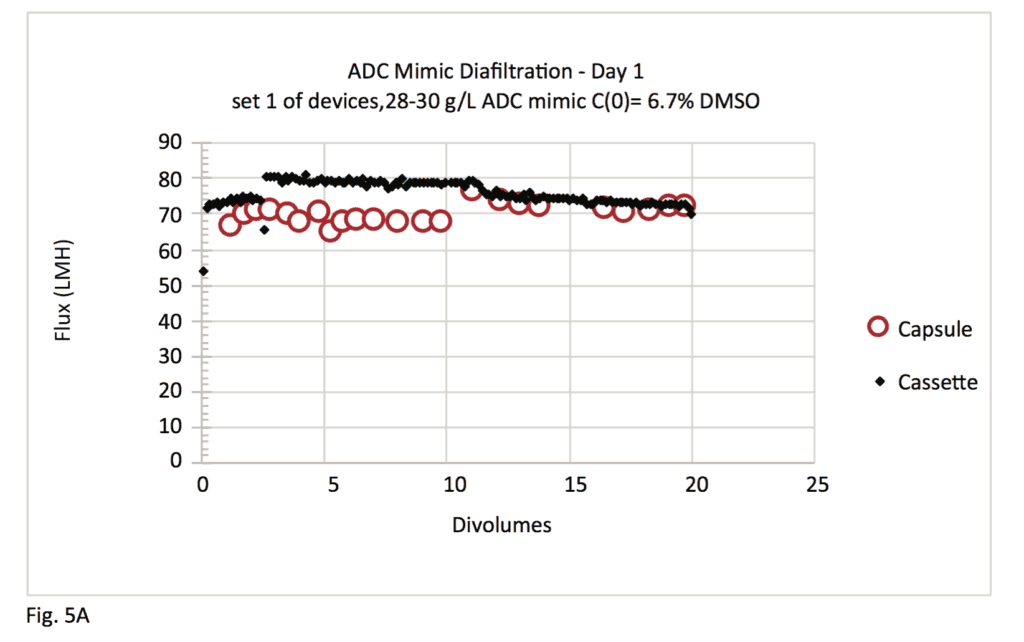 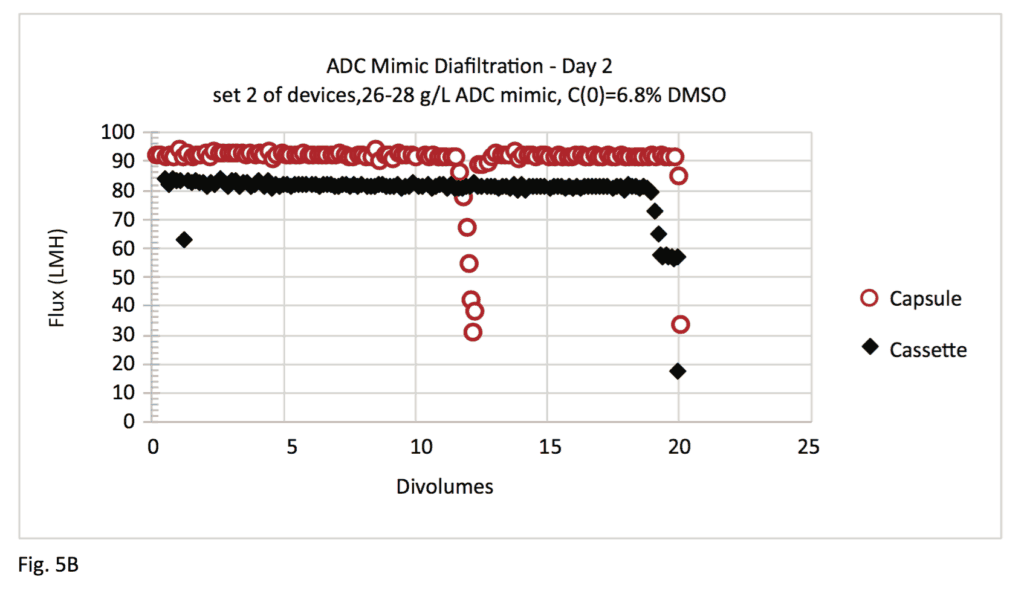 Yields were comparable and acceptably high for the two device formats (Table 2), and the aggregate formation rate for the ADC mimic was also similar (Figure 6). 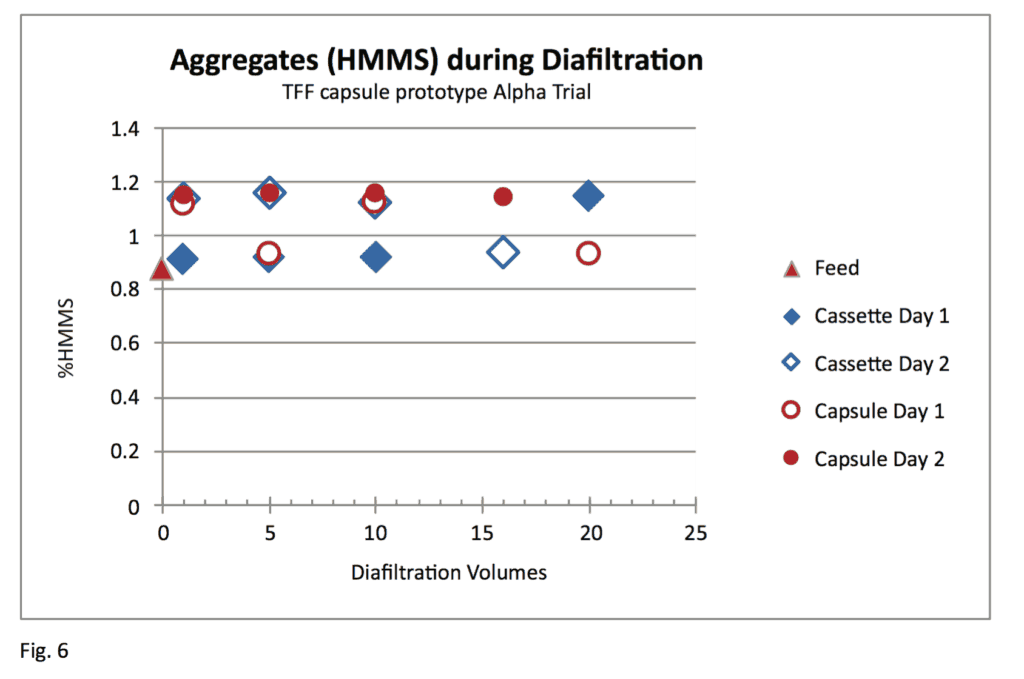 shown in Table 3. The capsule prototype demonstrated comparable performance to the cassette when run at the same feed flow rate and TMP.

Applicability Data
The capsule was user-friendly as summarized in Table 4. The capsule was lighter, more mobile, and easier to set-up than the cassette since it did not require a holder (5kg) and had fewer connections to establish the flow paths. Approximately 45 minutes was saved per alpha trial run by the capsule because the sanitization step was not needed. The potential time saved on the

GMP manufacturing floor can be many times higher. The capsule fit well within the typical TFF system flow path used for cassettes, and was also safer for the operator, as it did not need to be opened during disassembly to remove the filter: the capsule is self-contained.

Conclusion
An ADC mimic was used to compare the prototype TFF capsule to state-of-the-art benchmark cassettes. Both devices demonstrated similar process performance and clearance of the organic solvent (DMSO). Based on the assessment of the two device formats, the

capsule could be a safer, more time-efficient device for ultrafiltration/diafiltration processes of antibody drug conjugates. Follow up studies will be conducted to evaluate scalability of different sizes and types of devices using actual cytotoxic ADC material.