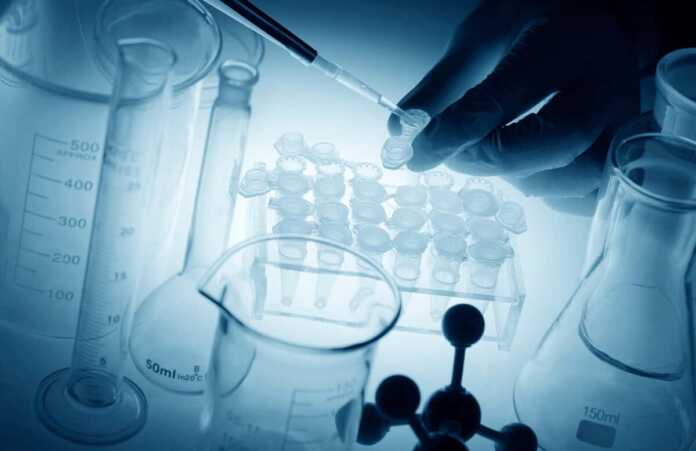 Abstract
Armed with cytotoxic payloads, antibody-drug conjugate (ADC) becomes able to kill its naked-antibody-resistant tumor cell. When ADC circulates in the plasma, complete detachment of conjugated drug due to continuous deconjugation process results in accumulating naked antibody, the drug-detached carrier. In this study, we investigated naked-antibody-impaired cytotoxic effect of ADC.

The cytotoxic effect of HER2-targeted RC-48 ADC (Remegen Ltd, Yantai, China) co-existed with its naked antibody against the naked-antibody-resistant HER2-positive SKOV3 cell line was analyzed. The effective ADC EC50 increased as naked antibody concentration increased, which confirmed the impairment in vitro. Assuming antitumor effect and cytotoxic effect were impaired to the same degree, we roughly assessed clinical efficacy impairment by analyzing pharmacokinetic profile of T-DM-1 (ado-trastuzumab emtansine, Kadcyla® | Genentech/Roche; one of the four antibody-drug conjugates approved by the U.S. Food and Drug Administration).

The inferred clinical efficacy impairment was significant during the whole time after intravenous administration, suggesting a promising room for improvement in ADC efficacy by eliminating the circulating naked antibody.

A novel experimental data driven bystander effect modified competitive antagonism model was trained to explain the cytotoxic data and predict the effective ADC EC50 when its naked antibody existed. Because naked antibody co-existence is prevalent amongst all ADC pipelines, this research may deserve a clinical evaluation.

1.0 Introduction
Antibody therapeutics have been booming for decades due to their outstanding clinical performance in treating cancer. However, almost all antibody therapies lead to drug resistance over time due to various mechanisms. To win the battle against cancer was still challenging. The recent emergence of break-through therapies gave us real hope of conquering cancer. The antibody-guided, drug-loaded, missile-like next generation therapeutic, antibody-drug conjugate (ADC), belongs to one of those promising therapies [1].

ADC is comprised of monoclonal antibody, the navigation element, targeting receptors over-expressed on cancer cell surface, and cytotoxic chemical drug, the warhead element, released after ADC, the missile, specifically entering tumor cell by internalization process. [2] A favorable property of ADC is that it can kill those tumor cells having evolved resistance to conventional naked antibody, which is almost the last hope of conventional-antibody-resistant patients with relapse. [3][4]

In most cases, on every ADC, the number of drugs conjugated, denoted as drug antibody ratio (DAR), is not uniformed, often ranging from 0 to 8, which can be measured in vivo. [5] When T-DM1 circulated in blood, an accumulation of naked antibody (DAR=0) was observed and explained by models[6].

Co-existence of ADC and its naked antibody after intravenous administration was a common phenomenon amongst all ADC therapeutic agents [7]. The extent of co-existence was dependent on stability of linker between monoclonal antibody and chemical drug. [8]

So far, the effect of co-existing naked antibody on ADC cytotoxic efficacy was unknown. Naked antibody, generally ineffective due to cell resistance, competes with ADC for binding to the same antigen receptor, therefore hampers ADC from entering target cell, and leads to impaired efficacy[1]. From the present point of view such impairment could be neglected since naked antibody accounted for only a small percentage of overall total antibody.[1]

However, we identified such impairment through co-treatment assays, and we inferred pronounced clinical disadvantage based on certain assumptions. A novel data driven model, which considered the bystander effect, was raised to explain the experimental results. Our results suggested a possibility to improve the ADC efficacy by reducing circulating naked antibody, which might deserve further clinical investigation.

2.1 In vitro cytotoxicity of ADC co-existed with naked antibody

2.2 In silico cytotoxicity of ADC co-existed with naked antibody

2.2.1 Schild equation
According to Schild equation, the drug-response logistic curve will be shifted by drug-ratio units when drug’s antagonist exists. [9] The equation is applicable if agonist A and antagonist B satisfy[10]: (1) The antagonist, B, is a true antagonist that, alone, does not change the conformation of the receptor; (2) Binding of agonist, A, and antagonist, B, is mutually exclusive at every binding site; (3) B has the same affinity for every binding site; (4) The observed response is the same if the occupancy of each site by A is the same, regardless of how many sites are occupied by B; (5) Measurements are made at equilibrium.
ADC is so similar to its naked antibody that we can suppose they share the same binding affinity (dissociation constant), molecular weight and internalization process. [11] The only difference is that ADC, the agonist, releases payload, while its naked antibody, the antagonist, does not, which means they satisfy the first four prerequisites.

The bias from Schild model caused by last unsatisfied prerequisite can be modified by bystander effect.

In Eq. 2.1, refers to the effective ADC EC50 when naked antibody co-exists at concentration [nkdAb], and KD the dissociation constant. Here the EC50 of RC-48 ADC on SKOV3 was 1560 ng/mL as estimated by linear interpolation and the KD was 70 ng/mL as reported. [3]

Such long-lasting killing process resulted in remarkable bystander effect, where released payload entered bystanding cells and killed them, which led to failure to satisfy the last prerequisite in Schild equation and therefore the far-smaller-than-predicted experimental EC50 results (Table 2.2 and Fig. 2.3).

Since bystander effect increased as ADC concentration increased [12], we hypothesized that effective cell killing and original one had logarithmic correlation in our training model, rather than linear correlation in Schild equation.

The modified equation predicts the effective ADC EC50 as follows:

In Eq. 2.2, B was defined as bystander constant, which was trained to 13 by experimental data (assuming Max=80% and n=1) using MATLAB. The effective ADC EC50 results of experiment, Schild equation and our model are shown in Table 2.2 and Fig. 2.3.

The comparison of all data points amongst three results is shown in Fig. 2.4.

The training algorithm is presented later.

Pij(B) is the output of model (Eq. 2.3) with bystander constant B, iteratively increasing from initial value 2 to optimal value such that the sum of square of difference between every model output and experimental data point is minimum (Eq. 2.4).

3.0 Discussion
Previous study neglected the impact of naked antibody on ADC efficacy due to its small percentage of total antibody (5%)[1].

When our results (I-P graph by linear interpolation, Fig. 3.1a) was applied to the T-DM1 profile (Fig. 3.1b), we roughly estimated how much more dose was wasted on antagonism over time. The result showed that the T-DM1 efficacy was impaired by 26.4% (Fig. 3.1c) immediately after intravenous administration, and became worse and worse.

Whether such impairment could be confirmed in vivo or in clinical trial was unknown. But when ADC and its naked antibody were co-administrated into animal, a better drug distribution was observed due to alleviation of binding-site barrier[13].

As for computational work, we gave a new competitive antagonism model which could explain and predict the effective ADC cytotoxicity when naked antibody existed, since Schild equation was no longer applicable.

Because bystander effect varied from cell to cell and ADC to ADC, we generated the model by experimental data, which was universal for all cytotoxicity modeling using the same type of cell and ADC. In our model, the bystander constant was the base of logarithm relation, which might be meaningful elsewhere in the field of ADC.

Acknowledgements:
The author thanks to his mentor Jianmin Fang for his guidance; Remegen Ltd for materials support; Renhao Li, Fei Tao, Jie Li and Yan Feng for their technical assistance; Qi Liu, Hua Gu and Lei Huang for their helpful discussion.

Emerging Trends in Single-Use Technology in the Manufacturing of Antibody-Drug...