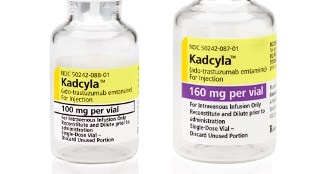 The antibody-drug conjugate combines two strategies: the anti-HER2 activity of trastuzumab, and the targeted intracellular delivery of mertansine, a tubulin polymerisation inhibitor that interferes with mitosis and promotes apoptosis.

The linker in trastuzumab emtansine is a non-reducible thioether linker, N-succinimidyl-4-(N-maleimidomethyl) cyclohexane-1-carboxylate (SMCC, designated MCC after conjugation). Emtansine refers to the MCC-DM1 complex.

Mechanism of Action
Upon binding to sub-domain IV of the HER2 receptor, ado-trastuzumab emtansine undergoes receptor-mediated internalization and subsequent lysosomal degradation, resulting in the intracellular release of DM1-containing cytotoxic catabolites. The binding of DM1 to tubulin disrupts microtubule networks in the cell, which results in cell cycle arrest and apoptotic cell death.[1]

The cytotoxic effect of ado-trastuzumab emtansine varies depending on the intracellular concentration of DM1 accumulated in cancer cells, high intracellular levels resulting in rapid apoptosis, somewhat lower levels in impaired cellular trafficking and mitotic catastrophe, while the lowest levels lead to poor response to ado-trastuzumab emtansine.[2]

Binding of ado-trastuzumab emtansine to the extracellular domain of HER2 triggers entry of the antibody-drug conjugate complex into cancer cells via receptor-mediated endocytosis [3]. A high rate of internalization may result in high intracellular concentrations of DM1, and deceleration of the endocytosis rate might cause loss of sensitivity to ado-trastuzumab emtansine. [4]

In vitro studies have shown that similar to trastuzumab, ado-trastuzumab emtansine inhibits HER2 receptor signaling, mediates antibody-dependent cell-mediated cytotoxicity, and inhibits shedding of the HER2 extracellular domain in human breast cancer cells that overexpress HER2.

Approval
Ado-trastuzumab emtansine is as a single agent, second-line mono therapy,  for the treatment of patients with HER2+ metastatic breast cancer (MBC) who previously received trastuzumab and a taxane, separately or in combination. Patients:

Ado-trastuzumab emtansine is approved for marketing by the U.S. Food and Drug Administration (FDA) and the European Medicine Agency (EMA).

Most second-line therapies are associated with either significant toxicities or limited improvements in overall survival (OS).

Clinical trials
In randomized clinical trials, efficacy has been demonstrated as the first line, second line, and later than the second-line treatment of advanced breast cancer.[2]