Home About Us Advisory Board Alain Herrera, MD 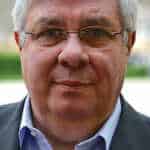 Alain Herrera, MD, is currently Consultant in Oncology and Associate Director at Kephren. He has created Alain Oncology Consulting (AOC) in November 2008 after heading the oncology business at Sanofi-Aventis for nearly 10 years where he was Vice President responsible for Global Oncology Business Strategy and Development (2007-2008) and Head of Global Oncology Franchise (1998-2007).  Alain contributed to the worldwide registration of oxaliplatin (Eloxatin®) and rasburicase (Fasturtec®/Elitek®) as well as the Gastric and Head & Neck indications for docetaxel (Taxotere®).

Before joining Sanofi he was Chairman of Chiron Therapeutics Europe (now part of Novartis) Director of Chiron B.V, Corporate Vice President and Member of Management Council of Chiron Corporation and Managing Director at Pierre Fabre Oncology Laboratories.  While at Roger Bellon (Rhône Poulenc), he was involved in evaluating the licensing of irinotecan from Yakult Co., Ltd (Japan) and was responsible for its early clinical development.

Herrera has been a Hematologist Consultant at Antoine Beclere Hospital and Beaujon Hospital (since 1991) and Senior Resident, assistant to Prof. Pierre Boivin (Beaujon Hospital/University Paris VII).

Herrera has published and lectured extensively as an invited speaker at national and international oncology meetings. He has authored numerous manuscripts in addition to contributing to numerous review articles and book chapters Herrera is an active member of ASCO (American Society of Clinical Oncology) and ESMO (European Society of Medical Oncology) and serves on the Executive Committee of ESH (European School of Hematology).